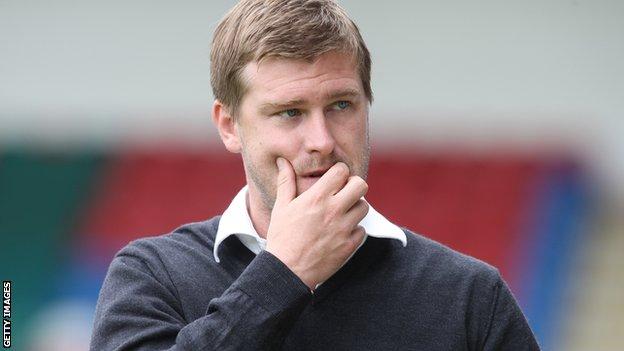 Manager Karl Robinson believes the MK Dons are in an "unstoppable" mood as they look to win promotion from League One to the Championship.

The Dons play their final match of the regular season against Walsall on Saturday ahead of a two-legged play-off semi-final against Huddersfield.

Robinson said his squad is determined to maintain their current momentum.

"We've discussed the play-offs at great length and I think the club is ready," he told BBC Three Counties Radio.

Victory against Walsall would do no more than confirm the Dons' fourth place finish in League One, but Robinson said there is no question of him fielding a weakened team as he looks to extend their current unbeaten run to six matches - form which saw Robinson handed the division's April Manager of the Month award.

Huddersfield, in contrast, have been inconsistent of late, and Robinson is determined to go into the double header against the Terriers with recent results on his side.

This is a different club to 12 months ago. It's our time - we're in an unstoppable mood

"I want to win convincingly against Walsall, I want a performance," he said. "This club is about winning, we don't know how to play for a draw and the effort and determination to win is always there.

"This is a different club to 12 months ago. It's our time. We're strong, happy, free-spirited but organised. There's a fine line between being organised and free-flowing, but we're in an unstoppable mood."

The Walsall game will be assistant manager John Gorman's penultimate match in front of the Dons' fans after he announced his retirement at the end of the season.

"John has chosen his time and we respect that," said Robinson. "Over the next few weeks we want to give him the ultimate send-off - and that's a win at Wembley."