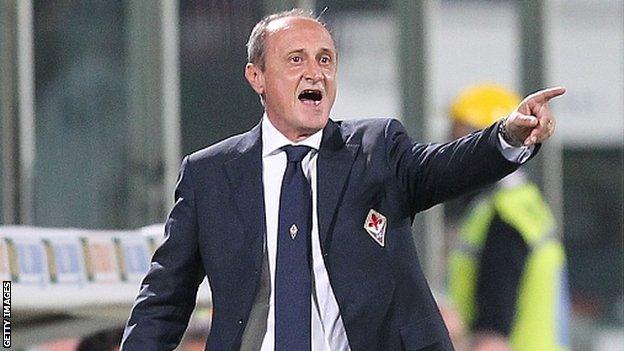 Sacked Fiorentina manager Delio Rossi has apologised for his behaviour after physically attacking one of his own players.

The 51-year-old went into the dug-out and threw punches at Adem Ljajic after the midfielder sarcastically applauded the decision to substitute him.

"I've made a mistake and I will pay for it," said Rossi. "My gesture was ugly, disgraceful and I am very saddened.

"I have never allowed myself to hit anyone, not even my children."

Rossi was dismissed by club president Andrea Della Valle immediately after Wednesday's game and banned for three months by the Italian Football League.

At a news conference to mark his departure, he apologised but sought to explain his actions.

"I don't compromise on certain issues," he said. "I want respect for myself, for my work, for the team I coach and for my family. These issues were raised.

"I have never said that I am a saint but you can ask the children and all the players that I have coached in the past what type of person I am."

Rossi has been replaced by team manager Vincenzo Guerini until the end of the season.

He inherits a side in 15th position, six points above the drop zone, needing a point from their remaining two games to guarantee safety from relegation.

"The job is almost done," added Rossi. "I ask the fans to be close to the players and to the Della Valle family."