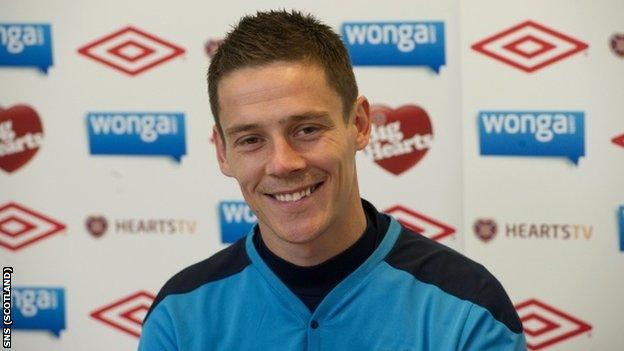 Outgoing Hearts midfielder Ian Black will eschew a potential Scotland call-up to focus on finding a new club in the summer.

Scotland face the United States in Florida on 26 May but Black requires a hernia operation.

And the 27-year-old, who has been a Tynecastle since 2009, will prioritise his club future.

"I really need to go in to get the op so I can get myself back," he said.

Black has not been offered a new deal and the combative midfielder is keen to be fit for the forthcoming campaign.

He admits his decision to have the operation straight away may cost him a potential Scotland call-up.

"Craig Levein will have his eye on players and who he is going to take," Black said.

"The hernia's going to get in the way, but if I can go and kick on at whatever club I'm going to be at then maybe I can catch his eye again and get the opportunity in another game.

"I've got to look at long-term, (so that) wherever I am I can hit the ground running and impress my new manager."

Black is open-minded about his future and would consider a move to England to further his career.

"I'm hoping to get a few offers. The phone's been quiet at the minute," the former Inverness CT player said.

"It's going to be hard leaving here to go bigger, but England would be a great opportunity if it came along and to play as high as possible down there would be great."

Hearts are gearing up for the Scottish Cup final against city rivals Hibs on 19 May, and Black aims to end his Tynecastle career on a high.

"I could leave Hearts as a legend if we win the final and to leave on that note would be an honour."

Earlier this week, Hearts first-team coach Gary Locke praised Black for his service to the club.

"He's a fantastic lad and a fantastic professional; he's played a huge part in the success we've had this season," Locke said.