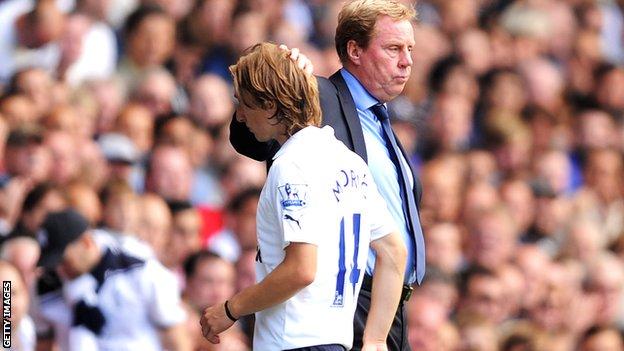 Tottenham manager Harry Redknapp has warned that the club will be "finished" if leading players such as Luka Modric and Gareth Bale are sold this summer.

"If you start selling your best players you're finished," Redknapp said.

"We are not looking to sell our best players. We are looking to build a team here, not dismantle."

Spurs managed to keep their squad intact last summer despite not retaining their place in their Champions League, where they enjoyed a sparkling season in 2010-11, reaching the quarter-finals.

However, Modric has yet to agree a new deal, while Bale has already admitted he would "have to discuss what's best for myself" should they fail to qualify again.

With two matches of the Premier League season remaining, the Lilywhites are fourth, ahead of Newcastle on goal difference, and only a point behind third-placed Arsenal.

But fourth place would not be sufficient to earn a place in Europe's elite competition if Chelsea win this year's Champions League final against Bayern Munich on 19 May.

Redknapp is determined that Spurs will not repeat previous summers when influential players such as Michael Carrick, in 2006, and Dimitar Berbatov in 2008, were sold to Manchester United.

"If we go backwards, we're going nowhere basically, are we? We will slump back into mid-table mediocrity and we don't want that," Redknapp said.

"The chairman made a stance with Modric last year - the stance was that we are looking to build, to add to the group we've got and improve for next year."

Modric, who joined Spurs from Dinamo Zagreb for around £16m in 2008, had been criticised for some indifferent performances in recent weeks but returned to form in spectacular fashion with a stunning 25-yard volley in his team's 4-1 win at Bolton in midweek.

"He's just a fantastic player, a great professional and a top bloke, so you want him here," Redknapp said.

"He's right up there with the better players in the world. You can't replace him. You wouldn't be able to replace him with somebody as good. That's why the other clubs want to buy him - because he is worth the money. But we don't want to sell him."

Spurs have recently recovered from a difficult period in which Redknapp was deemed overwhelming favourite to become England coach and they won only league match in nine.

Roy Hodgson's appointment as England boss ended speculation regarding Redknapp, the team have won their last two matches, and highly-rated full-back until 2017.

Regarding his own future Redknapp said: "I have never spoken to anyone about a contract. I have not chased Daniel (Levy, chairman), and he doesn't have to chase me. I have a contract here still at the moment so there is no problem.

"I am pleased and privileged to be at a club like Tottenham. They're one of the top clubs in the country and in Europe. They're a great club to work for so long may it continue."