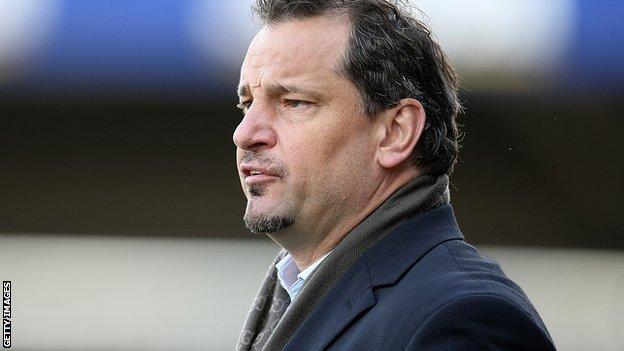 The football season may be over but the work continues for Aldershot Town manager Dean Holdsworth.

The 41-year-old will keep up his studies for the Uefa Pro Licence coaching badge with the Welsh Football Association.

"I'm eager to improve as a manager. Getting my Pro Licence will help me in the long term," he told BBC Surrey.

"It's the top award you can have as a coach. I'm eager to see how it can develop me to help my staff and develop the football club."

He added: "The more I do my badges, the more I love it. I'm getting addicted to coaching and management.

"The ups and downs you have give you great experience.

"Right now I seem to be like a sponge. I want more of it."

"There were some long seminar days but the invitation to go on that was brilliant for me," Holdsworth continued.

"To listen to them and take little bits and pieces away from them and their experiences was a great advantage."

Holdsworth, who had spells at Wimbledon and Bolton during his playing days, hopes he might be able to have the chance to coach abroad in the future once he attains the qualification.

"Having the Pro Licence will enable me to work anywhere around the world," he said.

"It's something that would excite me, long-term, if I ever had the chance to work in Italy or Spain.

"If you look at the England manager [Roy Hodgson], he's had his bag and travelled. You look at his CV and it's fantastic.

"I'd be prepared to learn and grow in different countries.

"It's about being a connoisseur of the game."