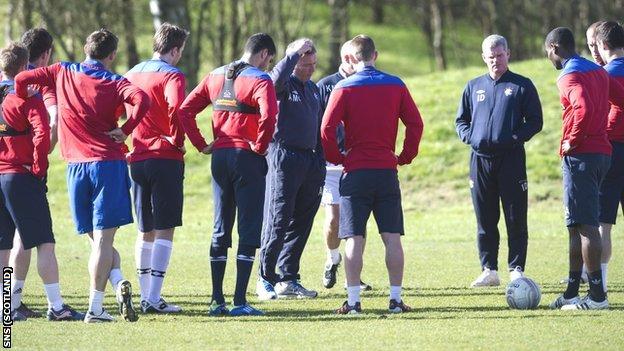 Rangers manager Ally McCoist says it would be "devastating" if players chose not to have their contracts transferred to a newco Rangers.

The club's administrators believe under prospective buyer Bill Miller's plan, players, like Rangers' other assets, would move to the new company.

But the players' union have cited employment law, which allows employees to opt out of a move.

"It's something that would have a massive impact," said McCoist.

Under employment law known as Transfer of Undertakings (Protection of Employment) Regulations 2006 or Tupe, employees are entitled to the same conditions within the new company as they enjoyed in the original company.

Amanda Jones, an employment lawyer with Maclay Murray Spens LLP, says there is no reason to think that law would not apply to football players, but adds: "The only complicating factor is player registrations, which are held separately from contracts by the governing bodies (the Scottish Football Association and the Scottish Premier League)."

There are a lot of players here who love playing for the club and appreciate what the club is all about. Never under-estimate that

Neither body will discuss a hypothetical scenario and await further talks with Miller as to his exact plan.

But the PFA Scotland are comfortable UK law overrides the issue of registrations, should any players choose to exercise their rights.

But McCoist said: "We are all assuming, if there's a possibility that the players can leave, that they will do that. That might not be the case.

"There are a lot of players here who love playing for the club and appreciate what the club is all about. Never under-estimate that.

"There are a good few boys here who have grown up with the club and know what the club is all about.

"It's maybe not just as straight-forward as a lot of people would think. Not all footballers just want to take a fast buck.

"Footballers are intelligent enough to understand that they have to look after themselves and their families - of course they do.

"But to suggest there is absolutely no loyalty at all among football players, I would say is totally wrong."

Regarding the PFA Scotland stance, McCoist added: "It's opinion at the moment and there would have to be a decision made by the powers-that-be.

"I don't think, at this moment in time, that it's clear-cut with a right or a wrong in terms of the players' contracts.

"It's something that would have a massive impact on the club if the players were allowed to leave or wanted to exercise that right.

"It would obviously not be a scenario that would suit the club at all. Clarification on that would have to be looked at sharpish."