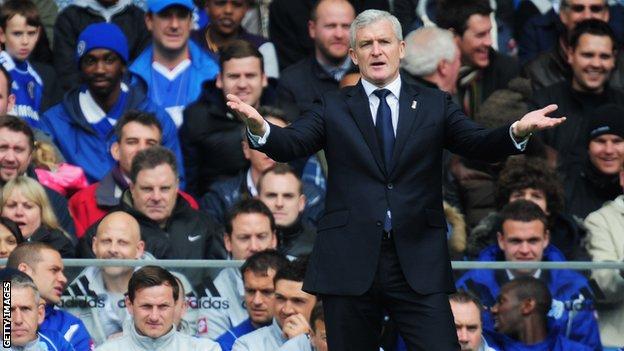 Hughes is a "little disappointed" West Bromwich Albion boss Hodgson, 64, was appointed during the relegation run-in.

Hodgson's mid-table team are at QPR's relegation rivals Bolton on Sunday and Hughes thinks the announcement should have been delayed.

"I hope that it won't have an impact on West Brom's performance," said Hughes.

QPR are 17th in the table, level on points with 18th-placed Bolton but above the relegation zone thanks to a better goal difference.

Hodgson has agreed to oversee West Brom's final two matches of the season before leading England at Euro 2012.

"It is a great opportunity for Roy and I am really pleased for him," added Hughes. "He has paid his dues, had a fantastic managerial career and I am sure he will do exceptionally well.

"I was a little bit disappointed that it came out this week. I felt people could have possibly kept it under wraps until all the league games were out of the way and all the issues that needed to be concluded were finalised, but that hasn't been the case, it has come out early.

"I would like to think they will go and work exceptionally hard for their manager, who has done a fantastic job for them and I am sure they will."

The timing of the decision has also been criticised by Tottenham manager Harry Redknapp, who was heavily linked with the post following Fabio Capello's resignation.

"It did drag on," Redknapp said.

"I don't know why they didn't do it six weeks ago? What was the big problem? West Brom weren't going to go down.

"It was non-stop speculation."