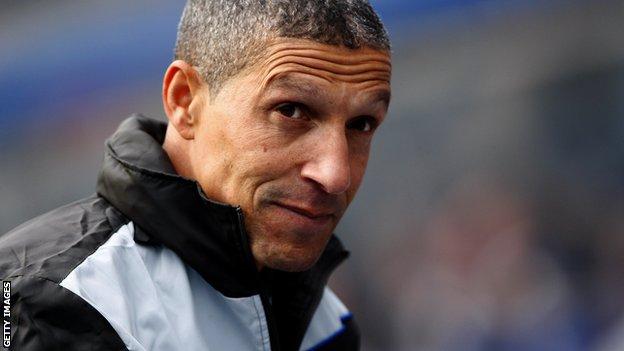 Birmingham manager Chris Hughton says his side must improve if they are to keep their Premier League dreams alive.

But he remains confident his team can bounce back to progress to Wembley when they meet at St Andrew's on Wednesday.

"We didn't use the ball well enough... we'll certainly have to improve, but we're still right in it," said Hughton.

An own goal by Curtis Davies gave Ian Holloway's Blackpool a narrow advantage as Birmingham faded after a bright start.

Marlon King hit the woodwork in the closing stages but Hughton was frustrated his side's failure to cause the hosts more problems.

"We always knew it was going to be a difficult game," added Hughton, after Birmingham's first defeat since 20 March.

In losing 1-0 at Blackpool, Birmingham failed to score against Championship opposition for the first time since a 0-0 draw at home to Hull on 14 February

"Blackpool get a lot of possession in the middle of the park and all you can do is try and restrict them to minimal chances, which we did.

"But we didn't use the ball well enough in our general play, or working on the counter."

Birmingham keeper Colin Doyle is a doubt for the return meeting after damaging his right shoulder keeping out Ian Evatt's header.

Doyle collided with a post and spent the remainder of the game in discomfort.

Holloway reckoned his side deserved more goals, but remained confident that his Tangerines can cause Blues problems at St Andrew's.

"I'm absolutely delighted with the way we played under pressure," he said.

"I wanted to try to play the brand of football we do, it was going to be tough and whatever happened it was only going to be half-time.

"Our play merited more than one goal but let's see if we go there and impose ourselves."