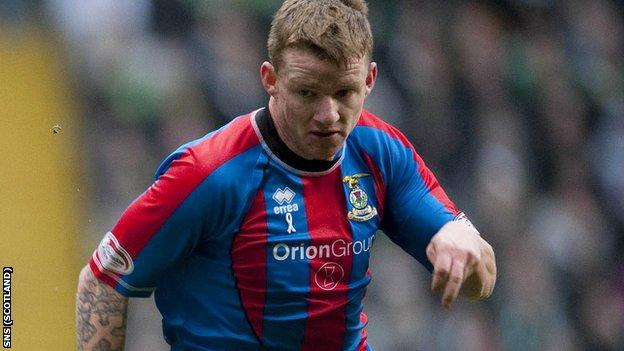 Manager Craig Brown has confirmed Aberdeen will have further talks with Inverness winger Jonny Hayes over a summer move to Pittodrie.

Brown was heartened by his initial conversation with the soon-to-be-out-of-contract Caley Thistle star.

Asked when he expects to meet Hayes again, Brown said: "This week or next week. He won't sign for anyone certainly without coming and seeing us.

"He's given that undertaking and I'm sure he'll honour that."

Irishman Hayes, 24, has scored eight goals this season despite missing two months with a shoulder injury.

Following a disappointing campaign for the Dons, Brown is on the look out for new recruitments but he was not prepared to disclose the names of his targets.

"There are other talks going on, with players but the players are with clubs at the moment and they're out of contract," said the former Scotland boss.

"We're talking to them and I always advise the manager (of the player's current club) out of courtesy."

Josh Magennis has been offered a new deal and Brown anticipates the versatile player will soon join goalkeeper Jamie Langfield and defender Clark Robertson in extending his stay at Pittodrie.

Brown added: "I'm assuming he had signed it. If he hasn't signed it, he's only that much away from signing it.

"Everything to me seemed very positive. I don't think it's going to be a major issue."