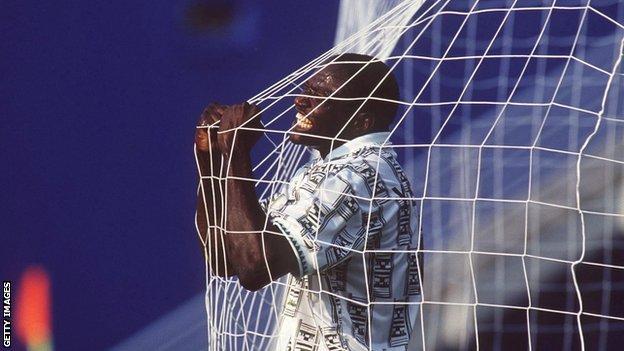 Tributes have been paid to the former African Footballer of the Year, Rashidi Yekini, who has died at the age of 48.

The prolific striker was the first Nigerian to take the continental crown and played a key role in some of his country's greatest football moments.

He scored Nigeria's first ever goal at the World Cup, against Bulgaria at USA '94, and led the way as they won the Africa Cup of Nations in the same year.

This was a man who gave everything for Nigeria

He is Nigeria's top international scorer, with 37 goals from 58 games.

He was also a prolific goalscorer in club football - seeing huge success with Shooting Stars of Nigeria, Ivory Coast's Africa Sport and Vitoria Setubal of Portugal, amongst others.

Yekini began his career with UNTL FC in Kaduna in northern Nigeria before moving to Shooting Stars, whom he helped to reach the final of the then African Champions Cup in 1984.

That was the same year in which he made his debut for Nigeria - and he was still playing for his country 12 years later, at the World Cup in France in 1998.

The moment that took him to global fame came at the World Cup in the United States, when he scored that goal against Bulgaria.

The strike itself was important enough, but the manner of his celebration, grasping the net in exultation (see photo above), became an iconic image of the tournament, and of the man.

His death, on Friday night, comes after a long illness, and he will be buried in his native Kwara State on Saturday.

"Today I don't think we have a striker who comes even a mile close to how good he was as a striker," his fellow Super Eagles star Sunday Oliseh told the BBC's Sportsworld programme.

"During my generation, he was the reason we were able to achieve the results we did - because of all the important goals he scored."

Amongst those paying tribute to him is the President of the Confederation of African Football, Issa Hayatou, who expressed the shock of "the whole of the African football family" at Yekini's death.

"Rashidi Yekini's fantastic display of skills and talent were evident to the world during Nigeria's campaigns at the USA '94 and France '98 World Cups finals - we will deeply miss him," Hayatou said.

Yekini lived a reclusive life since he quit football in 2005, when he returned to feature in the Nigerian league.

He aggressively shunned the media limelight and turned down several offers to be part of the country's football in other capacities.

Two years ago he rejected the chance to be a Nigerian football ambassador to the 2010 World Cup, a move which was never explained.