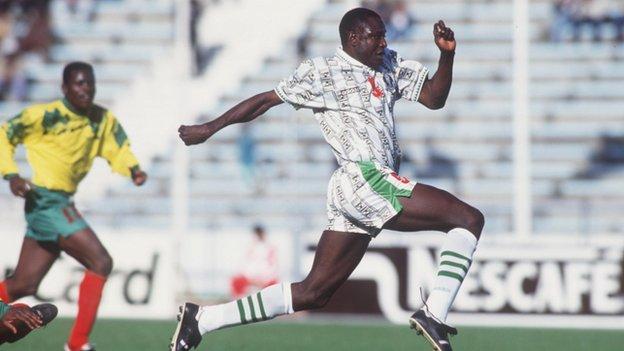 The death of former Nigerian star Rashidi Yekini has prompted an outpouring of emotion from his friends and former colleagues.

There is pride in his achievements, sadness at his death and anger at the way he had been treated by some.

"It is a very black day for us," former Nigeria midfielder Sunday Oliseh told the BBC's Sportsworld programme.

Those emotions were echoed by Yekini's captain at the World Cup in the United States in 1994, Stephen Keshi.

"A terrible loss for Nigeria and his family," the current Super Eagles coach said.

Yekini had been ill for some time and had in many ways cut himself off from his former life as a footballer - but Oliseh strongly criticised the way he had been treated by some.

"This was a man who gave everything of himself for Nigeria, and he was treated as if he were scum - sometimes he was being jeered when he walked on the streets because a few people went against the poor man," Oliseh told the BBC.

And he said Yekini had been given no support by Nigeria's football establishment.

"There was no means of [giving him] compensation for what he did for this country," Oliseh lamented.

Yekini consistently turned down the chance to be more involved with Nigerian football after his retirement and Keshi regretted the loss of his experience and expertise.

"It's a big shame that we didn't tap from his experience to improve our upcoming strikers," Keshi said - whilst remembering the man who saw his country to such success on the continental and global stage.

"[He was] a lively guy, who was full of life and fun," the former skipper said.

"[But] he isolated himself from everyone which was quite shocking - all I can do now is pray for God to grant him rest."