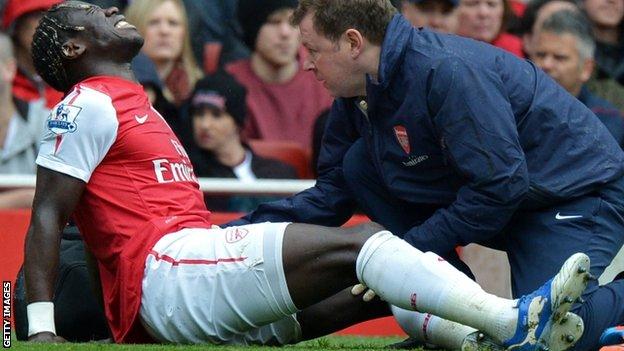 The 29-year-old was carried from the field after falling to the ground unchallenged in the 33rd minute of a pulsating 3-3 draw at the Emirates.

It is the second time this season Sagna has broken a bone in his leg.

He underwent surgery in October after falling awkwardly in the 2-1 north London derby defeat by Tottenham.

Arsenal manager Arsene Wenger confirmed the injury in his post-match news conference. "It is a broken fibula, the same leg. He was kicked on it, it has not happened alone," he said.

"When he was kicked, he has broken the leg. The guy closed him down and walked on him. I don't know if it was deliberate or not.''

Sagna will also miss Arsenal's final game of the Premier League season against West Bromwich Albion, as they push for Champions League qualification.

Yossi Benayoun, who had given Arsenal a second-minute lead in the Norwich draw, admitted he had feared the worst when his team-mate went down.

"I don't know exactly what happened but it looked like a bad one and he had a big one already this season," Benayoun said.

"It was similar in the same area as the last one but I hope he will recover quickly because he's a great player and that's more important than any points or win and hope he can recover quickly."