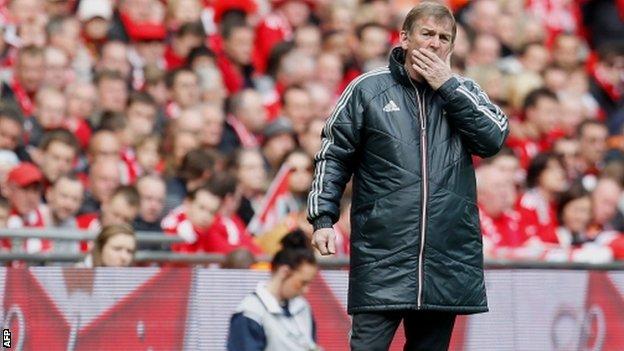 The questions must have come thick and fast as Kenny Dalglish watched Chelsea lift the FA Cup at Wembley.

This had been billed as a defining moment for Dalglish's Liverpool - a day that would make or break this curious season.

Instead the enduring image was of a 61-year-old manager trudging off the Wembley pitch with the weight of the world on his shoulders.

John W Henry, the Liverpool owner, was there to see it all.

The American must have hoped a second trophy in three months would have eased the scars of a difficult season. It was not to be.

"I believe Kenny is living on the brownie points he built up as one of the club's greatest players and from his first spell as manager. I am in the camp that says league form is vitally important. And Liverpool's hasn't been up to scratch this season. It would have been hard to argue against Dalglish if he had won the FA Cup. But he didn't. The points gap to Manchester City and United is completely unacceptable."

"A lot of people will turn on Kenny after that. But that is the world we live in, results are everything. He knows that," BBC Radio 5 live's Pat Nevin said.

Five Live's 606 programme attracted calls from Liverpool fans questioning Dalglish's methods on Saturday evening. And while that may not reflect the overwhelming feeling of the majority of Liverpool supporters, these were not lone voices.

"Is Kenny's P45 in the post?" one caller asked. "It has been a disastrous season. It doesn't give me any pleasure to say it, but it hasn't been good enough and that would have been the case with or without the FA Cup."

Others leapt to his defence. "I believe in Kenny Dalglish," another said. "He's the right man to the right club. He knows what's best for Liverpool, and that's it. I know there will be people calling for him to go but no one cares about the club more than him and that is good enough for me."

Henry and his Fenway Sports Group are determined to establish a new direction for Liverpool. The question now is whether Dalglish still fits in with that vision.

The Liverpool manager had been assured he had "the full support" of his owners but there has yet to be a public assurance he will be in charge next season. That may have come swiftly had Liverpool beaten Chelsea on Saturday, now questions will be asked again.

We will assess the season at the end of the season, not before

Liverpool were out-thought and out-fought for an hour at Wembley. It was only when Andy Carroll was introduced that they began to compete.

The opening goal summed up the problems facing Dalglish. Jay Spearing, a young midfielder expected to fill the void left by the departed Javier Mascherano and the injured Lucas Leiva, gave the ball away tamely.

Jose Enrique, whose sharp decline since the turn of the year must be of concern, mistimed his challenge as Salomon Kalou ran clear.

Before Pepe Reina, for so long Liverpool's most reliable performer, misjudged Ramires's shot as it fumbled off his left hand and into the net at the near post.

"You can't give a team like Chelsea two goals start," Dalglish said.

"But this same group of players will move on and get better next season and whether other players come in to join them wasn't going to be dictated by today.

"Today's group of players will be better for the experience they have had, even though it has not been a good one."

While Damien Comolli's departure as director of football last month appeared to make Dalglish's position more secure, it also served to remind everyone at Anfield that owners FSG will not hesitate to act if they feel something is not working.

Henry has privately expressed concern at the disparity between league and cup form and has asked his manager to compile an end-of-season review. The talks would have been conducted in a different atmosphere with the FA Cup on the table.

"We will assess the season at the end of the season," was all Dalglish would say on the matter after the final whistle.

The statistics will not make comfortable reading for anyone at Anfield.

Liverpool are eighth in the Premier League, 34 points behind Manchester United and Manchester City and 18 behind Arsenal, having lost as many matches as they have won this season and having scored only 43 goals.

Alan Green, the 5 live commentator, said the league form was great cause for concern. "I believe Kenny is living on the brownie points he built up as one of the club's greatest players and from his first spell as manager," he said.

"I am in the camp that says league form is vitally important. And Liverpool's hasn't been up to scratch this season. It would have been hard to argue against Dalglish if he had won the FA Cup. But he didn't. The points gap to Manchester City and United is completely unacceptable."

Dalglish, the embodiment of Liverpool in their pomp, had been forced to answer questions on whether cup success compensates for the decline of their league form. It might have done had red bettered blue at Wembley. It will be a far harder case to argue with only a Carling Cup to show for his efforts.

The problem for Henry and chairman Tom Werner is that the cult of King Kenny is central to Liverpool's identity. He is more than just one of the greatest players in the club's history, he is the man who held the city together in the aftermath of the Hillsborough disaster 23 years ago.

But Liverpool are a different club to the one Dalglish fell in love with. They can no longer compete with the top clubs in the transfer market and the scars of the Hicks-Gillett regime will take some time to repair.

Champions League football remains a distant prospect with the current squad, with Stewart Downing, Jordan Henderson and Andy Carroll failing to live up to the hopes their manager had for them. The summer ahead promises to be a crucial one at Anfield, the right players must be signed, problems must be addressed.

The concern for Liverpool now is that unless they change direction, they are in danger of being stuck on a constant journey from a glorious past to a bright future. The worry for FSG is that they may never reach their destination.

But Dalglish has brought stability and unity to the team and support alike.

Henry must now decide whether the Scot is the still the man to renew the club that he has come to embody.