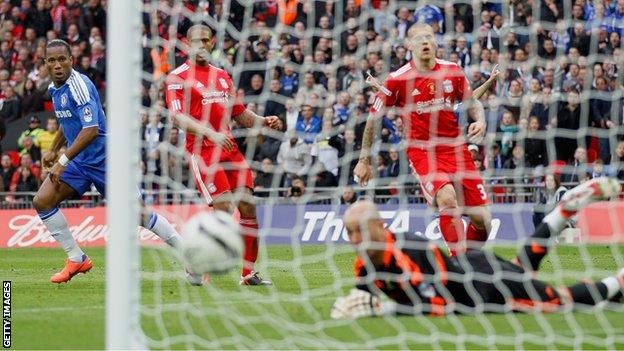 Didier Drogba has set his sights on claiming the European Champions League for Chelsea, following his part in their FA Cup triumph on Saturday.

"We have another final coming, so we will celebrate and then focus," Drogba said after the victory on Saturday.

Chelsea play Bayern Munich in the continental showpiece on 19 May.

And he played down his role in the triumph at Wembley.

"We made history, not only me - the result is great for us, for the fans, for the club, " Drogba said.

The Ivorian has played a central role in the resurgence of Chelsea since the sacking of former manager Andre Villas-Boas, but his future at the club is still in doubt, with his contract running out at the end of the season.

But the Chelsea hierarchy are now suggesting there may be moves to change that.

"Didier loves Chelsea and we love Didier and we'll continue to have the conversations and we'll see where that goes," Chief Executive Ron Gourlay said after the Cup final win.