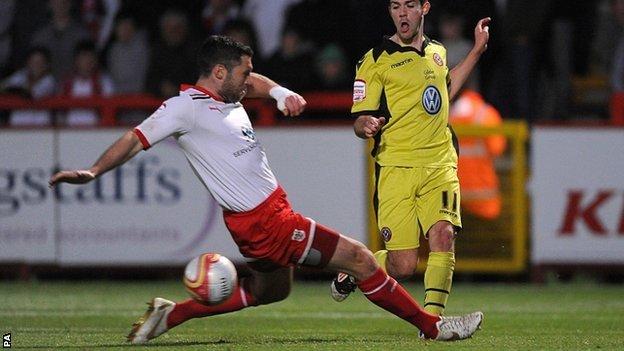 Stevenage and Sheffield United played out a goalless draw in their League One play-off semi-final first leg.

Craig Reid struck the United woodwork, while Boro goalkeeper Chris Day had to tip over a header from his own midfielder Michael Bostwick.

But neither side could find a goal ahead of Monday's second leg.

Stevenage and the Steel City

Stevenage have not lost to either Sheffield side this season, doing the double over Wednesday and taking two draws and a victory from their three encounters with United.

The game brought together two clubs possessing contrasting recent histories, with Stevenage looking for their third promotion in as many seasons and United - a Premier League outfit as recently as 2007 - seeking an instant return to the Championship.

Boro, who had been restricted to long-range efforts throughout the first half, came within inches of taking the lead when Steve Simonsen finger-tipped Reid's 25-yard dipping shot against the bar.

It came minutes before the break but seemed to draw United out of their shells for the closing stages of the first period.

A back-pedalling Day was forced to touch team-mate Bostwick's wayward header over the bar and Stephen Quinn dragged a grass-cutter wide of the post.

Continuing in that vain after the break, the visitors' Lee Williamson, who had a penalty claim dismissed following a challenge from Luke Freeman, drove straight at Day when cutting into the area.

But Stevenage, who showed they have the mettle for play-off showdowns last season when they were promoted from League Two, were able to rally, causing problems with Freeman's desire to run at defenders and, most notably, when Ashton should have done better when attempting to convert from four yards out.

The Blades, who have never tasted play-off success, almost stole something when McDonald's deflected effort spun its way into the arms of the wrong-footed Day.

And, despite an open and frantic final 10 minutes, Stevenage held out to record their 21st clean sheet of the campaign.

"Sheffield came with a game plan and a good game plan, which was to frustrate some of our fluent play they may have seen in previous matches.

"Ultimately we're disappointed to have not made clear cut chances and not made the most of one or two openings.

"It's come to something when we say a draw against Sheffield United is disappointing.

"The pressure is on them to make something happen. We scored twice there two weeks ago so there's no fear from us."

"It's finely balanced and we're taking nothing for granted.

"We have to have the same determination we had today. If we get carried away the second leg will go against us.

"We've seen too many times where people make assumptions after the first leg result - they think it's a foregone conclusion and it's far from that."