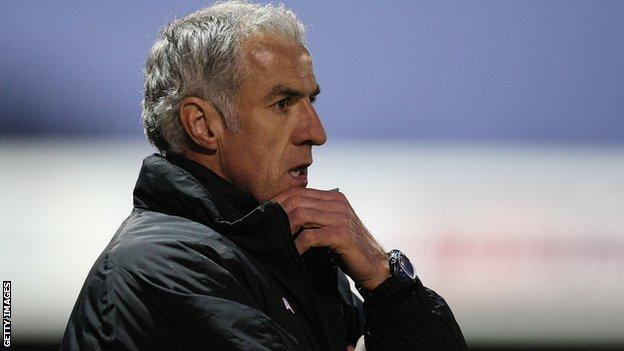 Caretaker manager Craig Brewster hailed Crawley Town's promotion to League One, their second in two seasons, as a "fantastic achievement".

The Red Devils beat Accrington Stanley thanks to Scott Neilson's goal to book their place in the third tier.

"For a club like Crawley Town, back-to-back promotions is an amazing achievement. The fans came in numbers today and backed us to the hilt."

Brewster took over with six games remaining after former boss Steve Evans left for Rotherham, but he was keen to praise the players' efforts that saw them over the line.

"The players put themselves in a fantastic position and we got there," Brewster added.

"Last week, everybody expected that we would get a win but, in football, sometimes when you expect, things don't happen,

"But today you've seen the real determination from all the players. The players put on a performance that was really dogged and it's a nice feeling."

Crawley's recent success has come since Bruce Winfield and Susan Carter became majority shareholders in 2010 and made funds available for former boss Evans to rebuild the team.

Players including Matt Tubbs, Sergio Torres and Richard Brodie helped fire the club up the Blue Square Bet Premier table, and they clinched the title 19 days after Winfield's death.

With Evans and Swindon manager Paolo di Canio at loggerheads for much of the current season, Crawley finished 2011 top of League Two, but dropped away following the sales of Tubbs and Tyrone Barnett.

We worked hard to put together a squad at Crawley Town and people questioned if they could come out of the Conference and then out of League Two, and I'm immensely proud that it's my team that has got promoted

After a game against Bradford City in March, Pablo Mills, Claude Davis and Kyle McFadzean were involved in a mass brawl on the pitch which landed the club an £18,000 fine from the FA and lengthy bans for the players involved.

And when Evans left the club less than two weeks later, it looked as though the Red Devils would have to go through the play-offs if they were to reach League One.

But three wins from the six games under Brewster and new director of football Steve Coppell ensured that they clinched the final automatic promotion spot behind champions Swindon and Shrewsbury.

Evans said he was delighted that his old club would be playing in League One next season.

"It's an immensely proud day for me," Evans told BBC Radio Sheffield. "I would like to send my congratulations to them. They are a wonderful group of players.

"I'm immensely proud of what's been done at Crawley Town and now we need to do that at Rotherham.

"We worked hard to put together a squad at Crawley Town and people questioned if they could come out of the Conference and then out of League Two, and I'm immensely proud that it's my team that has got promoted."