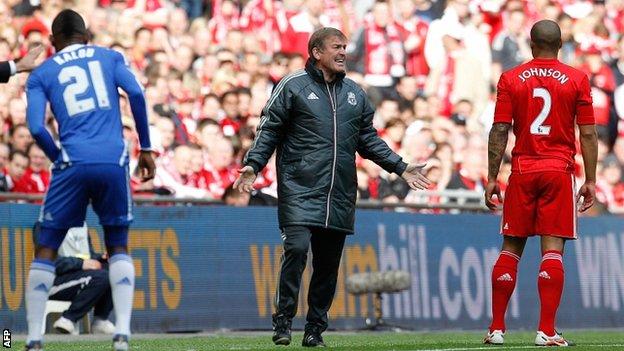 They won the Carling Cup on penalties in February but were beaten 2-1 by Chelsea in an FA Cup final in which they were criticised for a slow start.

"They've been in two cup finals in this season - they'll have enjoyed the first one more than the second," he said.

"The lads will benefit from the experience. You can't give a team like Chelsea a two-goal head start."

Many observers were surprised by Liverpool's lack of adventure in the opening hour of the Wembley showpiece and it was only the introduction of combative £35m striker Andy Carroll after 55 minutes that ignited their performance.

Carroll lashed home from inside the area less than 10 minutes after entering the fray and Liverpool pressed in the closing stages, only for Chelsea to hang on for a fourth FA Cup final triumph in the last six seasons.

"They were the best team for the first hour but we finished strongly and maybe if we'd started that way we'd be happier than we are now," Dalglish admitted.

It briefly appeared as if the game would be dominated by debate over whether the ball had crossed the line, much as Chelsea's semi-final with Tottenham had been last month.

Carroll was convinced his header had gone over before it was acrobatically clawed out by Chelsea goalkeeper Petr Cech, but referee Phil Dowd did not award a goal and replays suggested the right decision had been made.

"I thought it went in but if it hasn't then give the officials the credit they deserve," Dalglish said.

"We've just got to learn our lessons from it and understand we can't start the game like that."

Asked about his team's modest league campaign in which they have lost 13 of 36 games and scored only 43 goals, Dalglish added: "We'll assess the season at the end of the season."

"I had a few chances and could have put them away but it wasn't to be. We came here to win, it's been disappointing in the league, we got here and it was unlucky because it would have taken us into extra time. I did the best I could when I came on and we were unlucky."