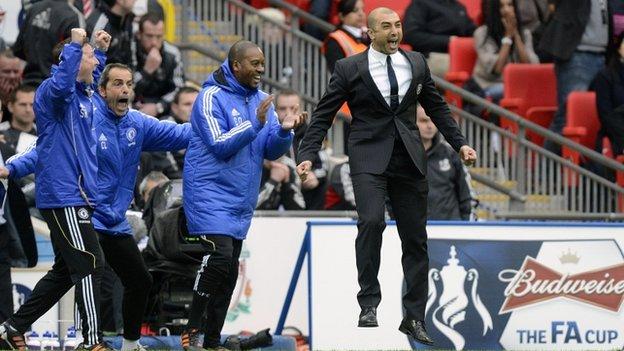 Chelsea interim boss Roberto di Matteo was calm over his future after boosting his chances of the permanent job with a 2-1 FA Cup final win over Liverpool.

He said: "The boss [Roman Abramovich] will make a decision at the end of the season. I'm very relaxed about it and the players will be fine.

"There is certainly a potential dilemma heading Abramovich's way, although history tells us he can usually solve these matters without recourse to sentiment or soft heart."

"I am a very fortunate person so it is not an issue."

Di Matteo, who has suffered only two defeats in 18 matches since taking charge, added: "I am very pleased with my position until the end of the season. The boss will then make a decision he feels is best for the club and we will respect that."

The Italian paid tribute to his players as they survived a late Liverpool siege to win and continue the turnaround in fortunes since the dismissal of former manager Villas-Boas.

"I am very pleased for the players," said Di Matteo. "We have had a difficult season with a lot of criticism but they have responded to all the adversity we have faced. I'm very pleased and satisfied with our performance today.

"I also think AVB should get some credit because he started us off on this run in the FA Cup."

Di Matteo has now won the FA Cup as a player and manager with Chelsea, saying: "I don't think many people get that opportunity. I'm fortunate enough to have played for this club and won the FA Cup and now I've been able to lead them to a trophy as coach."

Chelsea skipper John Terry said of the Wembley triumph: "It's fantastic, it's what we live for.

"At times people have slated us as too old, past it or not together but as a team we come together and unite when our backs are against the wall and we've done that superbly in the last 16 or 17 games.

"We've still got a massive trophy, the Champions League - that's the target for the owner from day dot. We've done Robbie the world of good and it can do him no harm."

Full-back Ashley Cole secured his seventh FA Cup winners' medal but said: "It's not about me. It's down to the team that I have managed to achieve that and I'm very humbled.

"We could have had a disastrous season but now we've won the FA Cup and we want to go and make history in the Champions League.

"There's a great team spirit and feeling of togetherness. There's a feeling that we can win every game that we play."