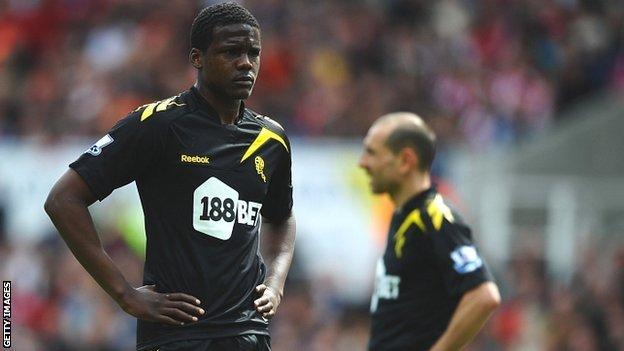 Bolton's 11-year stay in the Premier League has come to an end after being held to a draw at Stoke.

Only a win - and a QPR defeat at Manchester City - would have kept the Trotters up but they fell behind when Jonathan Walters bundled in.

Mark Davies' deflected goal and a cross from namesake Kevin, which snuck past Thomas Sorensen, gave Bolton the lead.

But Walters's goal from the penalty spot, after a foul on Peter Crouch, consigned the Trotters to the drop.

To rub salt in the wound for Bolton, both the goals they conceded were controversial - the first because Walters knocked the ball out of Adam Bogdan's hands and into the net and the second as Crouch appeared to go down very easily under the challenge from the Bolton keeper in follow-up to his own saved shot.

In addition, two injury-time Manchester City goals against 10-man QPR meant a win would have extended Wanderers stay in the top flight.

In truth, much of the damage was done in the final 15 minutes of last week's penultimate round of fixtures, which saw Bolton throw away a two-goal home lead to West Brom while Rangers were snatching a last-gasp 1-0 win over Stoke to leave Bolton fighting against the tide.

The finale of that game illustrated exactly why Bolton faced such grave circumstances heading into this game as a mixture of naivety and ineptitude meant they failed to see out a game that was all-but won.

Fittingly, the game at the Britannia Stadium was a similarly tense rollercoaster of an encounter, in keeping with what has been the most unpredictable of battles at the bottom of the Premier League.

Relegation brings to an end an 11-year stay by Bolton in the top flight, which represents the club's longest top-flight stint since the near 30-year stretch from 1935-64.

Bolton looked down and out when Stoke took the lead in the 13th minute as Walters bundled the ball out of the hands of visiting keeper Adam Bogdan and in. It looked to be a foul but referee Chris Foy allowed it to stand, much to the chagrin of Trotters boss Owen Coyle.

A dubious goal it may have been but it gave Stoke a deserved lead following a confident beginning from them and a meek start to such a key fixture from the away side.

However, Bolton battled back and things looked to have turned in their favour just before half-time courtesy of two bizarre goals.

A long goal kick from Bogdan was allowed to reach the Stoke box before home defender Andy Wilkinson struck his attempted clearance straight at Mark Davies and the ball ricocheted into the net to level matters.

Then, a serious misjudgement from Thomas Sorensen allowed Kevin Davies's cross from the right to sneak past him at the near post and put Wanderers in front.

Around the same time, Pablo Zabaleta gave Manchester City the lead over QPR to temporarily lift Bolton out of the drop zone.

The situation changed again in the second half when two QPR goals, either side of Walters' penalty plunged Bolton back into the bottom three.

With their relegation seemingly sealed for good, Bolton lost heart and once a Tim Ream header from a corner was saved by Sorensen they accepted their fate, unprepared for the potential redemption that was to be offered to them in the last few minutes at the Etihad.