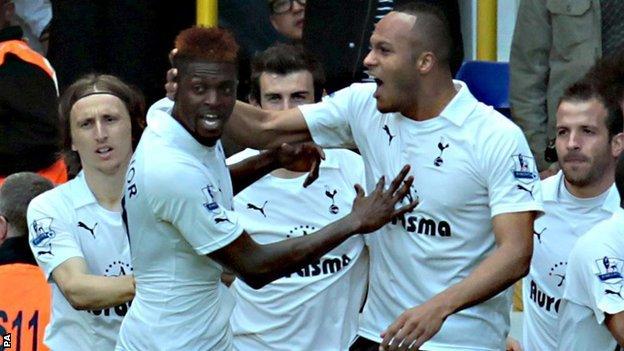 Tottenham beat Fulham to secure a top-four league spot but will only book a Champions League place if Chelsea lose the final of Europe's top tournament.

Emmanuel Adebayor slotted in to put Tottenham ahead against Fulham, who hit the post through Moussa Dembele.

Jermain Defoe confirmed Tottenham's win when he diverted in a shot after Aaron Lennon's deflected effort.

Spurs made sure of the win they needed to confirm a top-four spot but, hopes that Arsenal may slip up at West Brom to elevate them into third, ultimately proved in vain.

On an afternoon when there were cheers at White Hart Lane at West Brom's goals, and silence greeting Arsenal's strikes as the scores from the Hawthorns filtered through, Tottenham were left in a state of European flux.

Chelsea will take Tottenham's spot in Europe's elite competition if they win the Champions League final against Bayern Munich on 19 May, leaving Spurs to drop down into the Europa League.

Spurs would feel hard done by if that were the case and they will look back at a recent run of one win in nine league games as costly if they do miss out on the Champions League.

They might also rue the fact they could not produce the kind of determined performance against Fulham during those damaging results.

Fulham boss Martin Jol was back at White Hart Lane for the first time since his sacking by Spurs in October 2007 and any thoughts he might have had of earning a measure of revenge by potentially denying his former club a top four spot quickly began to evaporate.

Jol's side were on a run of five wins in seven league games and needed a point to equal their record Premier League points haul of 53.

But Tottenham got off to the ideal start as Adebayor played a one-two with Rafael van der Vaart before slotting a shot past keeper Mark Schwarzer.

"Once they knew the Arsenal result, it wasn't quite the day that Tottenham fans wanted. But by the same token it still means that Harry Redknapp has a chance of Champions League football next season. As regards today, Spurs did their job by beating Fulham 2-0."

The goal served to settle any Spurs nerves and they produced plenty of fluent eye-catching football which the Cottagers struggled to stem.

Spurs were quicker in thought and more urgent in their play, with a Van der Vaart shot curling the wrong side of the post.

Fulham raised themselves and twice came close to equalising. John Arne Riise had a powerful shot saved by Spurs keeper Brad Friedel, who was quickly back in action to keep out a strike from Dembele.

At half-time Spurs were third in the Premier League - with Arsenal drawing 2-2 at West Brom and Newcastle losing.

Tottenham almost let their lead slip when a Dembele shot beat Friedel only to come back off the post.

Spurs heeded the warning as Lennon's deflected strike fell for Defoe to divert home a left-footed shot from eight yards, although Spurs did not know whether to celebrate or not.

Fulham boss Martin Jol: "If you concede a goal after 90 seconds it is always difficult, you make it difficult for yourselves.

"We know that if you come to a place like White Hart Lane you have to play with flair and not be intimidated.

"In the first half an hour they were better, stronger and sharper and had everything to play for.

"We created a few chances and then they scored again after a bad clearance and that is exactly what you shouldn't do."