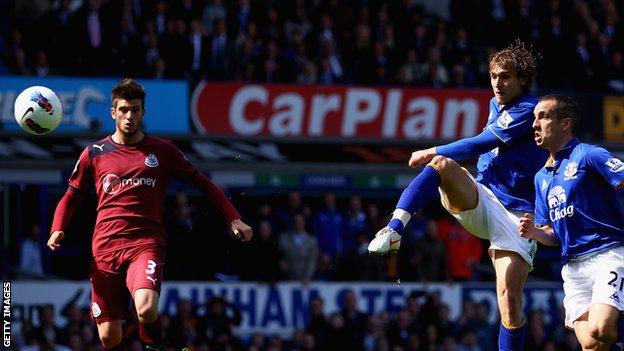 Steven Pienaar opened the scoring from 20 yards with a shot which deflected off Newcastle defender Mike Williamson.

Nikica Jelavic doubled the lead at the second attempt after being denied by Tim Krul before Johnny Heitinga headed the third.

Everton, who had Tim Cahill sent off after the final whistle, were better despite Tony Hibbert's late own goal.

Substitute Cahill was dismissed after appearing to grab Yohan Cabaye by the neck.

Newcastle have enthralled and amazed in equal measures this season, but this was one game too many for Alan Pardew's side.

They deserve huge credit for staying in Champions League contention to the last game yet Newcastle end the season with three defeats in four games.

In contrast, Everton closed the campaign on the back of a nine-match unbeaten run in the league which allowed them to finish above Liverpool in the table for the first time since the 2004-05 campaign.

There were times during the game when David Moyes's side played as though it was their first, not last, match of the season, so delightful was their play.

They never looked back once Pienaar opened the scoring after 16 minutes with a 20-yard attempt, following Marouane Fellaini's run, which deflected off Mike Williamson.

Pienaar, who is due to return to Tottenham after four months on loan at Goodison, was playing as though he had a point to prove.

The South African was denied a second goal by the foot of Newcastle keeper Tim Krul after Leon Osman had whipped the ball across the six-yard area.

Yet Everton were celebrating a deserved second goal after 27 minutes.

Jelavic was presented with the Premier League's Player of the Month award for April before the game and the Croatian demonstrated why he is one of the bargain buys of the season with another excellent finish.

The £5.5m signing from Rangers left Fabricio Coloccini trailing in his wake before Krul kept out his first attempt with a stunning save only for Jelavic to readjust himself and bury the ball in the back of the net.

Newcastle were a shadow of the side that had recently secured six straight Premier League wins.

Papiss Cisse went close on the stroke of half time while the Senegal striker was denied his 14th league goal since arriving from Freiburg in January when Tim Howard clawed away his effort.

Everton underlined their superiority when Heitinga made it 3-0 with a close range header following Darron Gibson's 65th minute cross.

But the drama was far from over.

After Osman had hit the post in the dying moments, Cahill was shown a red card after the final whistle after raising his arm at Cabaye and had to be dragged away by his team-mates.

Everton manager David Moyes: "I really don't know what happened (with Tim Cahill sending off). I felt the referee could have shown a wee bit of common sense.

"I really just wanted us to finish as high up the table as we possibly could.

"It didn't really bother me who we'd finish above, because I don't think you can really celebrate finishing seventh.

"The way I was brought up, you celebrate if you finish first or get Europe - if we'd finished seventh and got into Europe, that may have been something to shout about.

"But from where we were in October and November time, the teams we've had to overtake and the points we were behind, it's been a brilliant achievement by the players to come back from so far away."

Newcastle manager Alan Pardew: "I can't fault my players. They have been absolutely brilliant this season and I don't think many of the top teams have won at Goodison Park this season.

"Arsenal and Tottenham both won so that softens the blow a little bit (of missing out on the Champions League).

"We are very proud of what we have achieved."