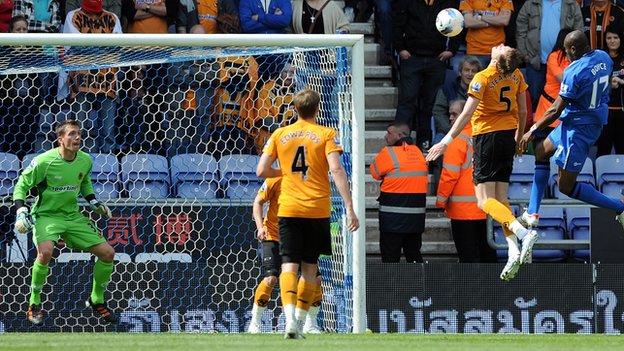 Wigan got a seventh win from their final nine games with victory over relegated Wolverhampton Wanderers.

Matt Jarvis gave the hosts the lead against the run of play with a curling effort from distance.

The defeat brings down the curtain on a miserable season for Wolves, and sees them limp out of the top flight after a three-season stay with only one win in 24 matches.

Terry Connor, placed in charge after the dismissal of Mick McCarthy in February, hands over to Norwegian Stale Solbakken having picked up only four points from his 13 games in charge.

In contrast, Wigan, bottom of the Premier League on 17 March, end the season seven points clear of the relegation zone, and played with the confidence of a side that had earned victories over Manchester United, Arsenal and Newcastle on the way to securing safety.

To celebrate their escape from the drop, and to look forward to an eighth successive season in the top flight, Athletic planned a minute's applause in the eighth minute of the game.

But, to spoil the celebrations, and against the run of play, Jarvis found space on the left, cut inside and produced a wonderful curling finish inside Ali Al Habsi's far post.

Wolves' final tally of 25 points is the fewest in the Premier League since Portsmouth's 19 in 2010, but Pompey had suffered a nine-point deduction. The fewest before that was Derby's 11 in 2008.

Wigan had already shown enough to suggest that their passing football would easily find a way through a Wolves defence that has often fallen short this season, and so it proved in the Latics' next attack.

Stephen Hunt dawdled on the ball, was dispossessed and, when Wolves were unable to clear the loose ball, Di Santo pounced to finish in visiting goalkeeper Dorus De Vries's bottom right corner.

Inevitably, given the confidence and form of the two sides, Wigan used the momentum of their equaliser to take an almost instantaneous lead, Boyce climbing highest to power in a header from Beausejour's corner.

With those three goals coming inside the opening 15 minutes, the rest of the first period was virtually devoid of any goalmouth action, though with Wolves unable to keep the ball and Wigan able to move it at will, the Latics looked the more likely side to add to their score.

The game remained open, and continued in a similar fashion in the second half, even though clear chances remained at a premium.

That changed though after an injured De Vries was forced from the pitch to be replaced by Carl Ikeme, who was forced to deal with efforts from Beausejour and Di Santo.

At the other end, Sylvan Ebanks-Blake headed over and Stephen Ward caused Al Habsi to save, but Wolves' hopes of leaving the Premier League with anything other than defeat were ended by Boyce.

A high ball was knocked down by substitute Hugo Rodallega, with Boyce smashing home a swerving volley.

There was still time for the visitors to take advantage of some sloppy Wigan defending - Fletcher finishing into an empty net after Kevin Doyle drew Al Habsi off his line, but that was merely the last rites of a miserable Wolves season.

Wigan manager Roberto Martinez: "I am proud and happy that the club are attracting a lot of good headlines and stories.

"We always need to be prepared that whatever happens is for the good of the club.

"We need to make sure we carry on with the progress we have been making in the last few years, not just on the pitch but off it.

"That is all I am bothered about; working hard and making sure the chairman is a proud man when he assesses his football club."

Wolves manager Terry Connor: "It was a frustrating way to sign off. It encapsulated the whole season and the reason why we have not been able to stay in the league.

"We had plenty of honest endeavour and commitment and no lack of attacking flair but we keep shooting ourselves in the foot by making mistakes as individuals.

"For the first goal we lost possession in the wrong area and the second goal was from a set-play from which everyone has their markers and should do better.

"It is really frustrating that even today the lads continued to give everything for the good of the team but have not been good enough to win."