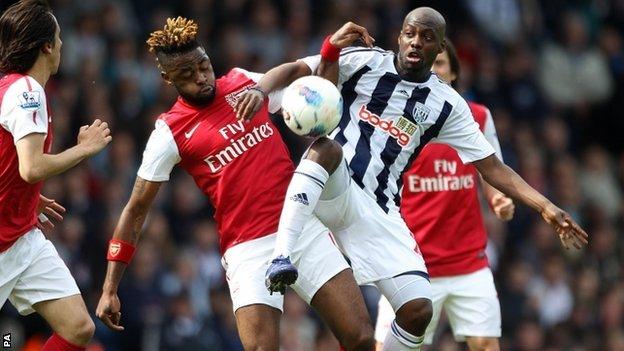 Arsenal secured their place in next season's Champions League with a thrilling victory at the Hawthorns that owed much to a series of errors made by West Brom goalkeeper Marton Fulop.

The 3-2 victory means Arsene Wenger's side finish the season in third place.

Fulop was at fault as the Gunners took a fourth-minute lead through Yossi Benayoun but two quick goals briefly turned the game in West Brom's favour.

But Andre Santos and Laurent Koscielny scored for Arsenal, who held on to win.

The importance of this result cannot be underestimated. While Robin Van Persie was a peripheral figure for much of the match, negotiations with the Dutch striker may prove a good deal easier with Wenger able to offer the guarantee of Champions League football next season.

Every Gooner will be a Chelsea fan next week....

The concern for the Arsenal manager will be that this was a far from convincing performance.

Wenger cut a frustrated figure on the touchline as he watched a performance that epitomised his side's faltering progress in recent weeks.

West Brom had suffered a setback before kick-off with the absence of injured Ben Foster, who had been ruled out on Saturday after straining a groin muscle in training, prompting Hodgson to give Fulop his Premier League debut for West Brom.

He might have been wishing he hadn't after four minutes, when a horrendous error by the goalkeeper allowed Benayoun to give Arsenal the simplest of leads. When James Morrison challenged Van Persie near the centre circle, the ball rebounded back towards Fulop on the edge of his penalty area.

But the West Brom goalkeeper hesitated as he waited for the ball to run into his box, allowing Benayoun to nudge the ball beyond him and into an empty net.

The goal shook West Brom from their slumber.

Soon they were pouring forward time after time, probing Arsenal's shaky defence in search of an equaliser and found more, scoring twice in four minutes through Shane Long and Graham Dorrans.

The first came after a typically forceful run by James Morrison, making his 150th appearance for the club. His through-ball found Long running beyond the Arsenal defence and the Republic Ireland striker found the bottom left-hand corner of the net as Wenger protested furiously for an offside flag that never came.

There was no debate about West Brom's second, however.

When Dorrans, moving on to another delightful pass from Morrison, headed the ball away from Laurent Koscielny before ramming it low past Wojciech Szczęsny with his right foot, he emptied salt into Arsenal's already raw wounds.

Neither side look sure-footed in defence, however. While the football was muscular and committed on both sides, a series of individual errors meant neither side look convincing in possession.

It was from one such mistake that Arsenal levelled the scores. Youssouf Mulumbu took one touch too many as he attempted to run the ball clear, Santos disposed him before fizzing a low shot into the net, although Fulop will once again have felt he might have done more as the ball slipped through his grasp.

The West Brom goalkeeper spent the latter part of the half-time interval working on his crosses but that counted for little when the action restarted.

Fulop came for Van Persie's right-wing corner but his punch propelled towards, rather than away from, his goal where Koscielny nudged the ball into the net with an out-stretched right boot.

The final minutes of the match were frantic and hurried but Arsenal stood firm to end the season on a high.

Hodgson heard his name chanted by West Brom fans at the final whistle even if the result was not the one he might have wanted in his final match in charge.

Arsenal manager Arsene Wenger: "I'm proud of the season. The mental solidity, the unity and solidarity inside the club has been tested. We didn't show any weakness and kept united. In the end, we came back. It's a good lesson for everyone. I told everyone to keep doing what they are doing and in the end we got there.

"We were 17th in the league and in the first seven games we had lost four of them. When you have played seven games, there are 31 to go. It's very difficult to imagine you can finish third.

"The intention is to speak with [Van Persie] before he leaves for the Dutch camp (for Euro 2012). Champions League football makes it easier to attract good players and keep them."

West Brom manager Roy Hodgson: "This is a fantastic football club with a great tradition and even in the rough times, I felt the fans were behind us. You deserve another year in the Premier League and I would like to thank all the staff and players for their support during this past 15 months."