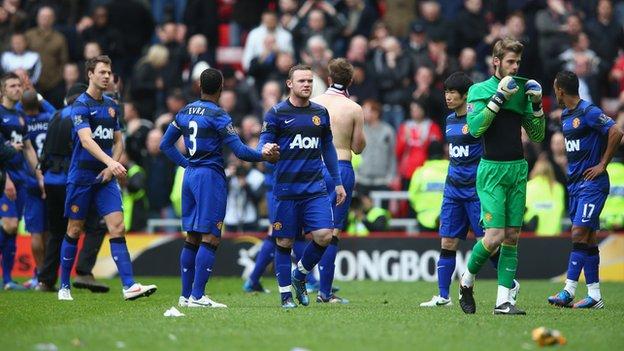 Wayne Rooney's first-half goal put United in charge and it looked like it would seal a 20th league crown as news filtered through that City were losing 2-1 to 10-man QPR.

But, with United fans in celebratory mood as it appeared their team might snatch glory, they faced an anxious wait as City equalised in stoppage time.

Then, as the Sunderland fans' cheers bellowed around the stadium, United's title bid was over when it became apparent City had pinched a last-gasp winner to seal their first title in 44 years.

It was a fitting end to a race that has fluctuated between both teams in the most dramatic circumstances.

United were made to pay for letting an eight-point lead as little as five weeks ago slip and, despite their final-day efforts, they will look back on a season where, when they needed to step up, they fell flat.

Two defeats in five games coming into this contest, and a draw with Everton, ultimately cost Sir Alex Ferguson's side in what became the most extraordinary finale to the league championship since Arsenal beat Liverpool at Anfield in 1989.

United were value for their win and Rooney could have had a hat-trick before half-time, with Paul Scholes also striking the post in the second half.

Rooney and his team-mates started ponderously, as if sensing the enormity of the occasion, but once Scholes began to link with Ryan Giggs in the middle of the park, the visitors increased the tempo with Sunderland struggling to keep up.

The Black Cats contributed to their own downfall for the only goal when Titus Bramble, making his first appearance since Boxing Day, and Michael Turner, let Phil Jones' cross bounce across the six-yard box as Rooney tucked in at the back post.

Near miss for Man Utd

Manchester United's 89 points is the highest for the runners-up in 20 seasons of the Premier League.

The United striker could have doubled his tally when his free-kick struck the bar from 20 yards, and he should have converted when Ashley Young fired towards goal from Antonio Valencia's cross.

Former United striker Fraizer Campbell volleyed a great chance wide from 12 yards after Stephane Sessegnon's clever chip, but United were largely in control by the break.

The home supporters were growing frustrated by several free-kicks awarded to United, and they wasted little time in mocking the 2,600 visiting fans when City took the lead against QPR, but Ferguson's team were quicker to the ball and using their five-man midfield to better effect.

And from another clever exchange, Rooney was again denied when Simon Mignolet stopped his fierce strike just after the break.

The United fans were given a huge boost when news filtered through of QPR's equaliser at Etihad Stadium, but it was Sunderland who were lifted as they appealed for a penalty when Sessegnon was brought down in the penalty box.

The contest was a lot more even in the second half, as the wind swirled around the Stadium of Light, but it took Craig Gardner's superb block to prevent Young getting on the scoresheet.

After the hour mark, events in Manchester were almost becoming a distraction such was the thunderous cheer from the United fans to greet QPR taking their unlikely lead against City.

At that stage, Ferguson's side were on course to be champions, and they almost went 2-0 up when Scholes hit the post, with Mignolet saving from Giggs after a quick break.

But as United saw the game out, little did they know that, having looked likely to win their 13th Premier League title, it was City who turned the table to snatch glory from their arch-rivals' grasp.