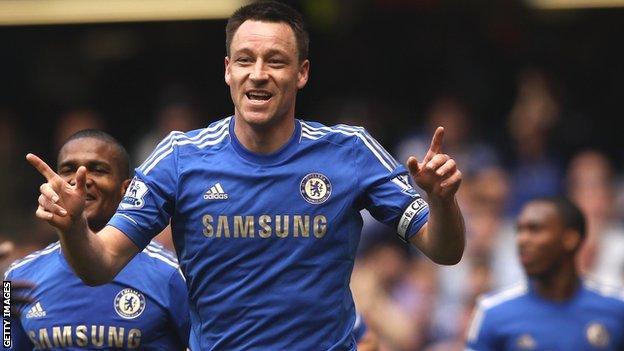 An under-strength Chelsea side eased past already-relegated Blackburn with a dominant display at Stamford Bridge.

The Blues rested most of their star names ahead of next Saturday's Champions League final but were too strong for their outclassed opposition.

John Terry's towering header from a teasing Romelu Lukaku cross and a toe-poked Raul Meireles effort made it 2-0.

Chelsea missed a host of chances but held on despite Yakubu's second-half header during a rare Rovers attack.

The scoreline did not reflect the home side's supremacy in an entertaining end-of-season dead rubber.

For Chelsea, an unsatisfactory sixth place - their worst in ten years - was guaranteed, while Championship-bound Blackburn could only finish second bottom after a season of turmoil on and off the pitch.

The home side's failure to secure Champions League qualification through their Premier League finish and Blackburn's inability to take their relegation scrap down to the final game meant the Blues could fully justify their weakened team selection with no fear of reprisals.

The small matter of the Champions League final against Bayern Munich meant Blues manager Roberto di Matteo was only ever going to use this match as an exercise in protecting his squad, and he did so while also giving full Premier League debuts to defender Sam Hutchinson and teenage striker Romelu Lukaku.

Both impressed, Hutchinson with a solid display that will give him confidence if called upon in Germany next week should David Luiz and Gary Cahill fail to recover from injuries, and Lukaku with a bustling performance leading the line.

Teenager Lukaku and Daniel Sturridge were both prominent as Chelsea's movement, incisive passing and relentless tempo pinned Rovers in their own half.

Kean denied Lukaku when the burly striker was through one on one and also produced a decent save to prevent Gael Givet putting through his own net, while Sturridge missed a glorious headed chance from six yards following a Lukaku cross.

The pressure finally told on 31 minutes when Terry's beautifully controlled header from Lukaku's centre nestled in the far corner.

Yakubu's goal was only the third league goal Blackburn have scored against Chelsea since May 2006.

Chelsea quickly added a second with another goal from a player suspended from next week's Champions League final when Meireles shot home from the edge of the box after Michael Essien beat three men.

Yakubu gave Rovers a glimmer of hope to end a miserable season on a relative high when he nodded in his 18th goal of the campaign from two yards after Scott Dann headed a corner back across goal.

But Chelsea continued to control the match. Ramires almost made it 3-1 within seconds when his flick looped onto the top of the bar, Sturridge twice went close and Ryan Bertrand nearly got on the end of an inviting cross.

Substitute Didier Drogba also fizzed a 35-yard strike wide on what could be his farewell appearance at Stamford Bridge. Chelsea's fourth top scorer of all time, who is yet to agree a new contract, got a brilliant reception from the home fans.

His arrival - and the response it generated - suggested it could well be his last chance to say goodbye after eight years with the Blues.

But Chelsea, who will have to wait to discover the extent of a hamstring injury to Florent Malouda, did not need a third goal and will now turn all their attention to Saturday's Champions League final.

Chelsea interim manager Roberto do Matteo on his own future:

"It doesn't matter. It is no problem and there is no news. I am happy. I have had a great time, the players have been magnificent and I will always remember this time whatever happens. I am very relaxed about it and focused on Saturday's game.

"I would like to everyone at the club. They have been magnificent and I will always have a legacy here whatever happens.

"We wanted to finish with a win. It was a typical end-of-season game, but it was a good to win and important to go into next week with a good feeling. It was hard to stay focused - with the final coming up it is not easy. We had a lot of chances. We could have scored a few more but it was just important to win and get that feeling of winning.

"We are looking forward and preparing for Saturday. It will be an exciting game and an historic time. We will go with a lot of confidence and belief that we can bring the trophy home."