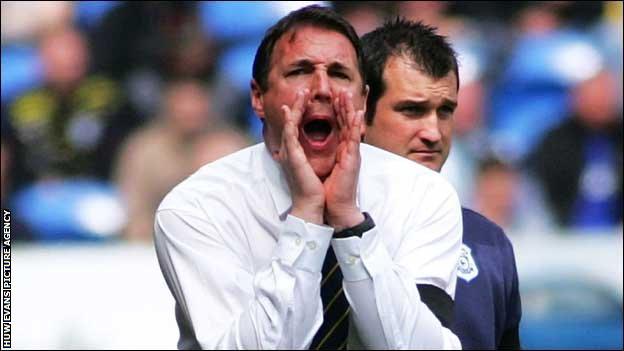 The Hammers beat the Bluebirds 2-0 in the first-leg and Mackay knows no side has ever transformed a two-goal arrears in a Championship play-off semi-final.

Cardiff travel to West Ham on Monday having only ever won twice at Upton Park and both by just a single goal.

But boss Mackay said: "Who cares? Statistics are there to be broken."

West Ham, who missed out on automatic promotion by only two points, were relegated from the Premier League last season and are favourites for a top-flight return.

Including last week's first leg, Sam Allardyce's side have lost just once in their last 19 league games.

The Welsh club, in their third successive play-off campaign, have won four of their last five away games - but Mackay's men have only been victorious by two goals or more twice this season.

"They expect West Ham to go through, that's a natural reaction, but myself and my team don't go in with that attitude - we have 90 minutes to score two and win the game. We have a fighter's chance."

And Mackay has told his players to be inspired by Liverpool's famous 'spirit of Istanbul' when Rafa Benitez's side fought back from three goals down at half-time in the 2005 Champions League final to ultimately beat AC Milan on penalties.

"Two-nil can be a dangerous score if they are put under pressure," said Mackay.

"The first goal will be vital and I think we need to score first - and if we do that we'll get a toe-hold back into the game. It can also change the atmosphere.

"But we have to be aware tactically and be aware of the result so far.

"We need to make sure we are disciplined as there is a tendency to go gung-ho from the first minute and go for it - but we must stay in the game.

"We know it will be a stiff test as they have experienced top-level players."