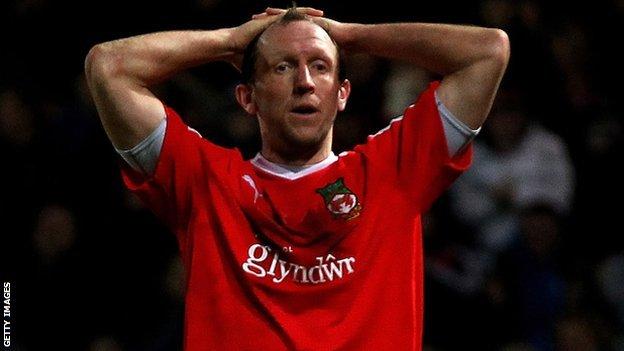 The Racecourse is expected to be full for Monday's second-leg and Wrexham's players insist they "owe their fans everything" for saving their club.

"We must give the fans something to shout about," said boss Morrell.

"They then can get behind us and will us to a famous victory."

Wrexham were in financial trouble at the start of the season but were cleared to start the season when Football Conference chiefs revealed fans had gone "far beyond the call of duty to their club" after raising £100,000 in seven hours to ensure the Welsh club had the funds to fulfil their league fixtures.

Our fans are magnificent. I couldn't put food in my little boy's mouth and they all clubbed together and sorted that for us - so we owe them everything and we will give them everything

"Our fans are magnificent and have been all season," said defender Mark Creighton.

"We owe them everything as they kept the club alive when some of us weren't getting paid.

"We had some horrible times at the start of the season

Wrexham have endured a tumultuous campaign that started with the club failing to pay staff and players, a change of management as Andy Morrell replaced the departing Dean Saunders and the club underwent a change of ownership.

"The players have had a lot of chances to have excuses and throw the towel in," said Morrell.

"But you can't fault them as they wanted promotion.

"From where the club was at the start of the season and not paying wages and possibly not being in the league, to finishing with 98 points and pushing for automatic promotion is a huge achievement.

"But to say that and not come out with something at the end of it, having another false dawn could be a damp squib."

Wrexham, hoping for a Football League return after four years in the non-league, have the best home record in the division and 13 of their 16 home wins this term have been by a two-goal margin or more.

Morrell's side have also kept the most clean sheets as they finished second in the division and the Wrexham manager wants a 25th shut-out of the season.

"We're still in it," said Morrell.

"Hopefully in their minds, they think they have one foot in Wembley already and we may be able to catch them on the hop a little bit.

"We've got to release the shackles and and go for it because we have nothing to lose."