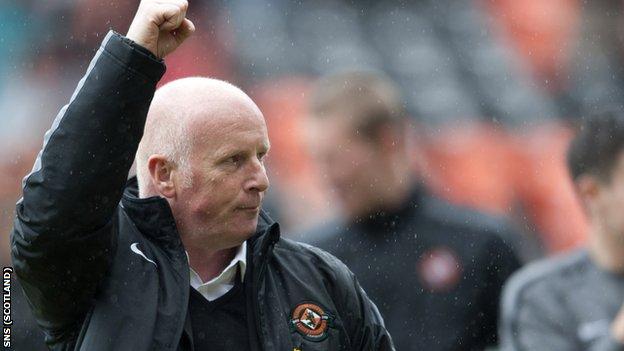 Dundee United manager Peter Houston praised his players following their 1-0 victory against Celtic in the club's final home match of the season.

The win all but cemented fourth place for the Tannadice club and guarantees Europa League football next season.

"I'm delighted and proud of the players and backroom staff," said Houston.

"It's been tough, but great credit and great spirit this team has got. When we needed to, we've come in with a run and we deserve fourth place.

Scott Robertson headed in a hastily-taken corner to give the hosts a 21st-minute lead, proving to be the only goal of the match.

It's been tough, but great credit and great spirit this team has got. When we needed to, we've come in with a run and we deserve fourth place

United held out to claim a hard-fought win and Houston commended the season-long efforts of his players following a difficult start to the league campaign.

"It started off poorly - we only got 10 points from our first quarter, but we showed a bit of mettle," said Houston.

"We didn't panic, kept going at it and working hard on the training ground.

"Look at Johnny Russell, he's still a kid in the game - but he's been magnificient, scoring the amount of goals he has," said Houston.

"And we have a lot of players whose time will come next year. We have lots of good professionals and excellent character in the dressing room."

Sunday's win was in contrast to the midweek defeat by Rangers at Ibrox, but Houston feels the reward of European football next season more than makes up for it.

"We got hammered 5-0 midweek by Rangers, and they were hurt and disappointed," said Houston. "But they came out against a good Celtic side and we made it difficult for them.

"I'm really proud of the guys. They can all awalk away with their heads held high.

"They've got us into fourth place and a European slot, which is all you can ask of them.

"To finish hopefully in fourth position, is a huge achievement for Dundee United."