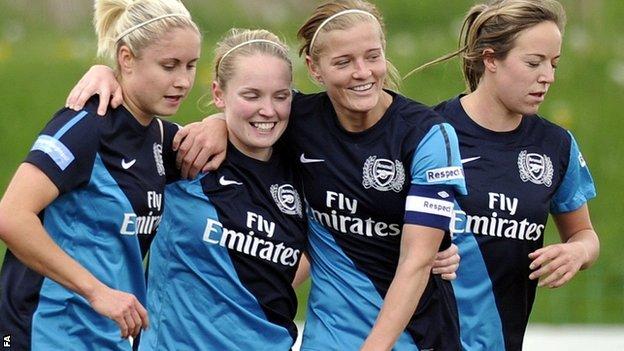 Arsenal moved four points clear at the top of the Women's Super League with a 2-0 win at Liverpool thanks to a brace from Scotland international Kim Little.

And Chelsea are level on points with the West Midlands side after a goalless draw against Bristol Academy.

Everton beat Lincoln 1-0 to move level on points with both the Imps and Bristol in the table.

Little dusted herself down to convert the first after being fouled by Samantha Chappell four minutes before half-time.

And 13 minutes into the second period she scored again from the spot following a Linda Shepherd's handball.

And four minutes before the interval midfielder Jo Potter headed in a Carney cross to give the home side a clear advantage.

Eni Aluko put the result beyond doubt in the 70th minute, the striker rounding goalkeeper Mary Earps to tap the ball into the empty net.

Bristol striker Ann Marie-Heatherson's disallowed effort midway through the first half was the closest that either side came to scoring.

Everton won a close-fought game with a 27th minute goal by Gwennan Harries, who chased a long ball out of defence to shoot home.