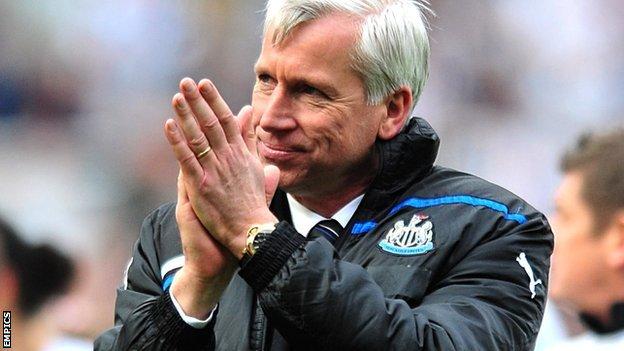 Newcastle manager Alan Pardew is still hopeful his side can finish inside the Premier League's top four despite Sunday's 2-0 defeat by Manchester City.

The Magpies need to beat Everton on the final day and hope Arsenal or Tottenham fail to win against West Brom and Fulham respectively.

"If we can win at Everton it will put massive pressure on Arsenal and Spurs. They have got to win now," said Pardew.

Remaining fixtures in the race for third and fourth

"Had I been offered this at the start of the season I would have taken it."

Pardew added: "David Moyes and Everton will want to finish the season on a high but if we can win away from home we will have a great chance."

Despite the defeat by the Premier League leaders, Arsenal's draw with Norwich and a similar result for Spurs at Aston Villa has left Newcastle still in with a chance of a top-four slot and possible Champions League qualification.

Chelsea can also make the top four if they win their remaining two games and other results go their way, while they can also qualify for next season's Champions League in they win this year's final against Bayern Munich.

Should the Blues prevail on 19 May and finish outside the top four, they will take a Champions League spot at the expense of the team that finishes fourth.

Manchester City's win over Newcastle, courtesy of two goals from Yaya Toure, ensured that they will win the title for the first time in 44 years in the beat QPR on the last day, barring an unlikely swing in second-placed Manchester United's goal difference.

"We knew the first goal was going to change everything," said Pardew.

"We didn't get it but we had a few chances to. Once that goal went in, we had to push on and that opened us up a bit.

"It was a great performance by my team. You have to say Manchester City were brilliant.

"When you can bring on one world star for another, that freshness just made the difference."