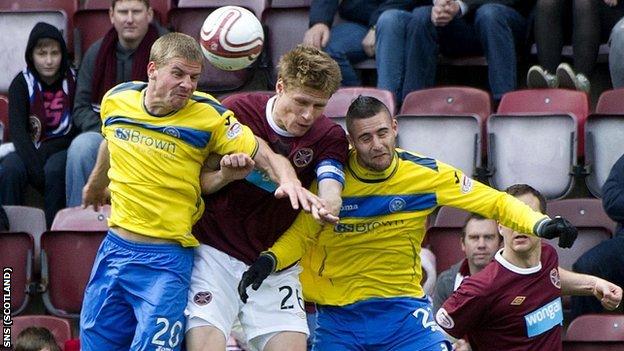 St Johnstone manager Steve Lomas admits the Perth club have "one eye on next season" after their European hopes took a blow with a 2-0 defeat by Hearts.

Lomas must now hope for a win against Rangers and a loss for Hearts at Celtic in next weekend's final Scottish Premier League fixtures.

However, a Hearts win in the Scottish Cup final would guarantee Saints a place in the Europa League.

"We wanted to do it off our own back," said Lomas after the Tynecastle loss.

"I'm disappointed. We had so much to play for. The goals were at killer times.

"We had a couple of chances. The quality wasn't there. Overall, Hearts deserved the win, simple as that.

"Obviously, we have quite a few coming out of contract so we've definitely got one eye on next season, we have done for a long while.

"It's something for the chairman to look into because we can only line players up, it's [about] getting them up [to sign] and we've got a big job in the summer.