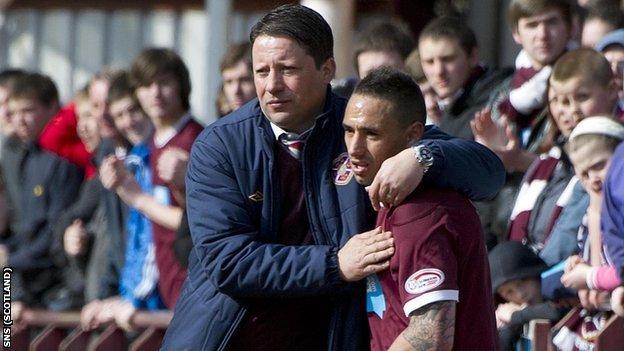 Hearts manager Paulo Sergio hopes to stay at Tynecastle next season but is still unsure over his long-term future at the club.

Sergio's side marked their last home match of the season with victory against St Johnstone.

And the win puts Hearts in line to qualify for next season's Europa League, which they can also reach if they win the Scottish Cup final.

"We will see, I hope so," said Sergio about the prospect of staying.

"I love our supporters, I respect them a lot. All the season, they were backing us and I hope that they still do in the two games we have this season."

Goals by Rudi Skacel and Andy Webster ensured a comfortable victory against Saints.

"It was a very good performance because St Johnstone are a good side, we respect them. Because of that, the victory has more flavour."

Celtic host Hearts in next weekend's Scottish Premier League finale before the all-Edinburgh cup final on 19 May.

Asked if he was now looking towards the clash with Hibernian, Sergio replied: "No, I have Celtic to talk about with my players all this week."