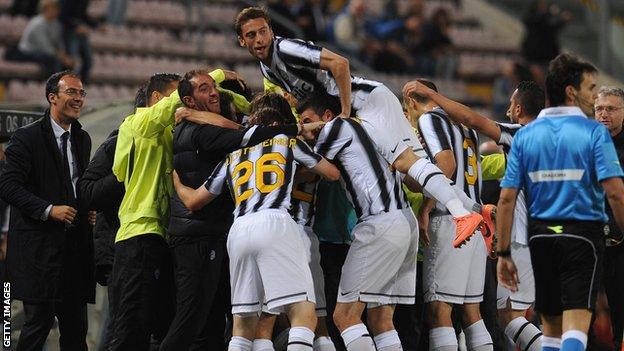 Juventus are the champions of Italy for the 28th time after wrapping up their first Serie A title for nine years.

The Turin-based side beat Cagliari 2-0 to go an unassailable four points clear with one round of fixtures remaining.

The only club which could have toppled them, AC Milan, lost 4-2 to city rivals Inter Milan at the San Siro stadium.

Inter's Diego Milito scored a hat-trick, including two penalties, as they recovered from 2-1 down early in the second half.

Mirko Vucinic had given Juventus the lead in the sixth minute when, after marginally beating Cagliari's offside trap, he slotted between goalkeeper Michael Vucinic's legs.

Their win was confirmed when Cagliari's Michele Canini put through his own net with 16 minutes remaining.

AC Milan had the chance to take the title race to the last round of the season, but Zlatan Ibrahimovic's brace was not enough for the defending champions.

Juventus had their 2005 and 2006 titles taken away as a result of a match-fixing scandal which engulfed the Italian game.