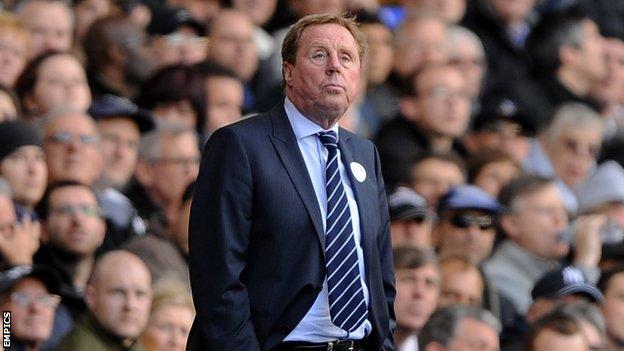 Tottenham manager Harry Redknapp has called on the club to be "bold" in the transfer market his summer to compete near the top of the table.

Spurs are chasing a third-placed finish and Champions League spot going into the final game of the season.

Redknapp told BBC Radio 5 live: "We're a good side. If we're bold in the summer, we can build a team again that can be right there again next year.

"The league is changing and a top-four position is very difficult to achieve."

Spurs, who are one point behind third-placed Arsenal, will be guaranteed a place in Europe's premier cup competition if they overhaul the Gunners.

A fourth-placed finish will only be enough if Chelsea lose their Champions League final to Bayern Munich - and they could yet finish outside the top four if they fail to win and Newcastle pick up three points.

Redknapp, the 65-year-old former Bournemouth, West Ham, Portsmouth and Southampton boss, has spent much of the season in the headlines.

He was and then heavily tipped to get the England job, a time during which Spurs' form dipped and they almost fell out of the Champions League running.

He said: "I'll be glad when next week is over. It's been a long old season. I just want to get in the Champions League and have a break and get away for a few days.

"It has been a hard year for me personally. What I went through with the court case was the most difficult thing I've ever faced in my life.

"It definitely takes a strain on you. I do tend to get on with things but there's no doubt it has an effect."

But he says it was a relief to not be offered the England job,

"It was no hassle to me at all," he said. "It never really bothered me. When I heard that Roy had got the job on Sunday night, I went out after the game. I didn't go out feeling 'oh my God'. I woke up the next morning and I was quite relieved in a way that I didn't have a decision to make."