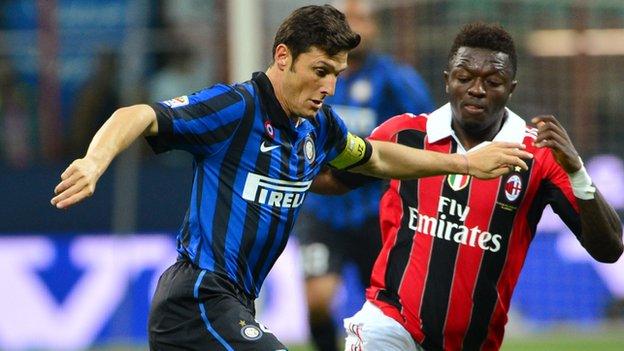 Inter Milan have been fined 20 thousand euros after their fans rained abuse on Ghana star Sulley Muntari throughout the Milan derby on Sunday.

Muntari is on loan at AC Milan from Inter and attracted constant jeers from the crowd in the San Siro.

Italian authorities decided some of the abuse was racially motivated but Milan were also fined - 10 thousand euros - for the behaviour of their fans.

Inter won the game 4-2 - a result which handed the title to Juventus.

The always-fiery contest included no fewer than three penalties, a hat-trick for Diego Milito and two goals for Zlatan Ibrahimovic, and was played out in a frenzied atmosphere.

Fans of both teams displayed offensive banners and abused their rivals.

Muntari attracted particular attention from Inter fans because of his previous history at the club.