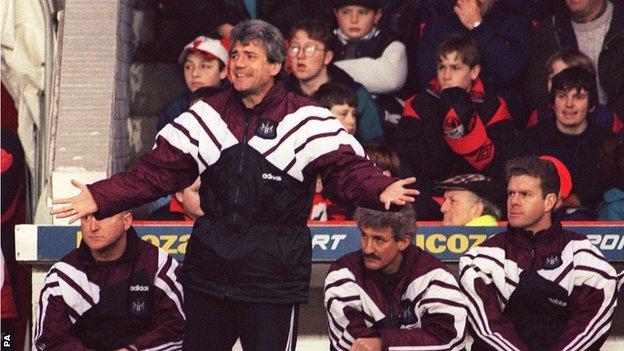 Former Newcastle manager Kevin Keegan's "I would love it" remark from the 1995-96 season has been voted the most memorable in the Premier League era.

A panel chose the winner from the five nominated quotes in the Premier League's 20 Seasons Awards.

Keegan's rant came when Manchester United boss Alex Ferguson suggested other teams might not try as hard against Newcastle as against his side.

The Magpies had led by 12 points at one stage that season but lost the title.

As the Red Devils pulled their way back into the title hunt, Ferguson questioned how motivated the Magpies' opponents were.

And in an interview on live television, Keegan said: "When you do that with footballers like he said about Leeds, and when you do things like that about a man like Stuart Pearce...

"I've kept really quiet but I'll tell you something, he went down in my estimations when he said that. We have not resorted to that. You can tell him now, we're still fighting for this title and he's got to go to Middlesbrough and get something.

"And I'll tell you, honestly, I will love it if we beat them. Love it.

"But it really has got to me. I've voiced it live, not in front of the press or anywhere. I'm not even going to the press conference. But the battle is still on and Man United have not won this yet."

Manchester United went on to win the title by four points.

The other four nominees were Eric Cantona for his gnomic comments about sardines and seagulls, Jose Mourinho describing himself as a "special one", Sir Alex Ferguson's description of the title run-in as "squeaky bum time" and Alan Hansen famously announcing, with reference to a Manchester United team containing the young David Beckham among others, that "you can't win anything with kids".

There are 11 awards in total to celebrate 20 years since England's top flight was rebranded as the Premier League, with Manchester United striker Wayne Rooney already winning best goal for his overhead kick against Manchester City last season.

The awards voted for by fans are best goal, match, save, goal celebration and fantasy team and those decided by a panel of of football figures, journalists and commentators are best player, manager, team, season, quote and fantasy team.

The winners of the awards will be announced over the next week, in the run-up to a special presentation ceremony on Tuesday, 15 May when the player and manager awards are named.