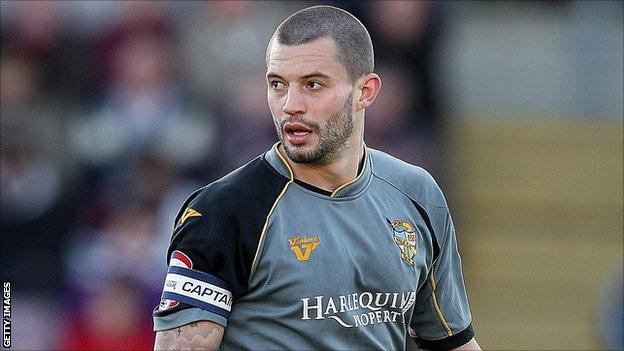 Port Vale skipper Marc Richards is prepared to commit his future to the soon-to-be rescued League Two club - if he can agree terms on a new deal.

Following this term's money troubles, which cost Vale a 10-point penalty, and effectively any chance of promotion too, the club only have a handful of players still in contract on 30 June.

But Preston target Richards, 29, wants to lead a Vale assault on promotion.

"I want to put on a Vale shirt again," he told BBC Stoke & Staffordshire.

"If I can come to an agreement with the manager and the chairman."

Vale's 16-goal top scorer, who will be a free agent come 1 July, is reportedly wanted by League One Preston.

If the manager can bring in some experience and some new legs, then we could be challengers next year

But prospective Vale owner Keith Ryder is yet to take over the club. And Richards insists that he always wanted to see out Vale's frustrating season before sitting down with boss Micky Adams to sort his future.

"I said to my agent that I didn't want to hear anything until the season had ended and that's the way it has stayed.

"I'm sure I'll speak to him at the start of next week, and reassess what we've got coming up.

"There's a squad of players here at the club capable of challenging for a promotion, whether it's top seven or top three.

"Really we were just short of top three this year. And, if the manager can bring in some experience and some new legs, then we could be challengers next year."

As things stand, midfielder Doug Loft and defenders Gareth Owen and Adam Yates would be the only three players still in contract after 30 June.