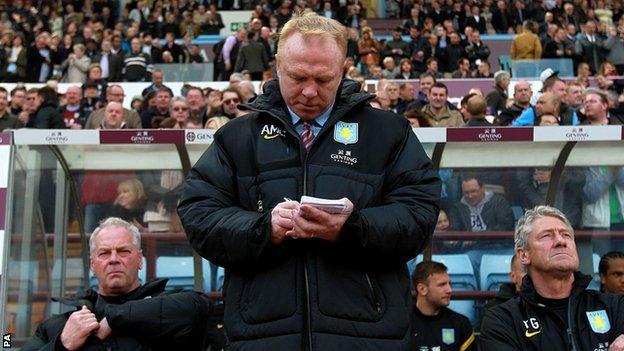 Under-pressure Aston Villa boss Alex McLeish says he has taken the flak for his players this season but will not do so again next year.

Fans have been calling for the former Birmingham boss to leave the club after a draw with Tottenham effectively ensured their Premier League survival.

He said: "I have taken a lot of weight on my shoulders this season. I was happy to take pressure off the players.

"I am not going to next season though. They better get their finger out."

The ex-Motherwell, Hibernian, Rangers and Scotland boss joined Villa in the summer from arch-rivals Birmingham City, an appointment that sparked protests at Villa Park at the time.

And a return of just nine wins from 41 games has not helped his cause as Villa sit three points above the relegation zone, albeit with a far superior goal difference to their nearest rivals, going into the final game of the season.

But McLeish is already planning for another term in charge.

"We are assessing next season. We've been assessing it every single week. We've got to start putting a plan of action in place.

"I would certainly look to be strengthening the squad. This season we have taken the plunge into the reduction of wages. It's hopefully helped the finances a little bit.

"It has put us through the mill, no doubt about it, but we're planning and we can rise. At clubs I've worked with before, with proper planning, we've done well.

"If I can go through that this season, I will have to have a crack at the big time and try to enhance the quality of the squad."