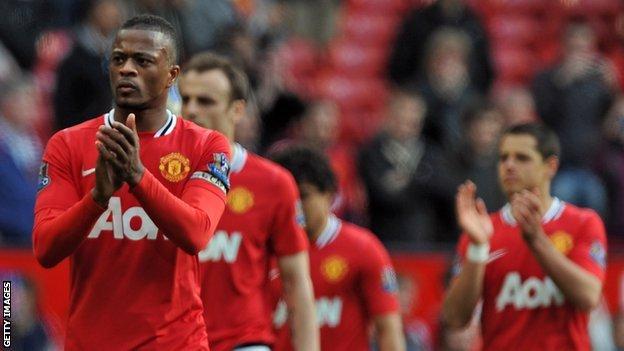 Manchester United captain Patrice Evra does not think it will be the "end of the empire" if they lose their Premier League crown to Manchester City.

United, who led by eight points one month ago, trail City on goal difference with one game left.

Evra said: "I know that if we don't win the league then a lot of people will say this is the end of the empire and ask how we will survive.

"But there is a lot of talent at this club."

Evra, who has captained United this season in the absence of Nemanja Vidic, has made more than 290 appearances for United since signing from Monaco in 2006, but he may have to wait to add to the four Premier League winners' medals he has picked up at Old Trafford.

To win a 20th league title, United need to better City's result against QPR when they face Sunderland on Sunday, or else win by eight more goals than their rivals.

However, Evra believes Sir Alex Ferguson's side have done well to take the title race to the final day of the season, in a campaign which has been disrupted by injures.

Vidic has been sidelined since December with knee ligament damage, while Darren Fletcher remains out of action with a bowel condition.

Tom Cleverley, Rio Ferdinand, Chris Smalling, Phil Jones and Michael Owen have also spent large chunks of the season in the treatment room - something Evra believes has had an impact in the title race.

"We've had to deal with a lot through injuries and losing experienced players last summer and it's never easy to find a solution immediately," the French defender added.