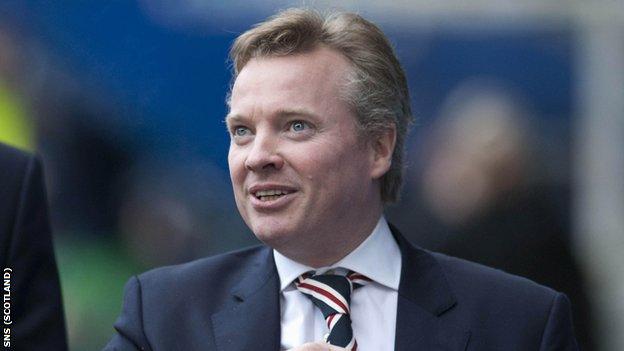 Following Bill Miller's installment as preferred bidder, Kennedy had stated the need for everyone concerned to back the American's plan.

While that stance has not changed, Kennedy has been in talks with Whyte.

Whyte has voiced his desire for the club to avoid liquidation and remains open to dealing with Kennedy.

While Miller's proposal involves a CVA (Company Voluntary Arrangement) in parallel with the creation of a "newco" Rangers, without Whyte's agreement to transfer his 85% stake in the club, the "oldco" would ultimately be liquidated, barring a successful legal battle.

Edinburgh businessman Kennedy, who allied himself with Paul Murray's Blue Knights consortium in recent weeks, will not try to usurp Miller's bid to take control of Rangers.

Indeed, he believes time has probably run out for the Blue Knights' plan to exit administration through a CVA.

However, Miller will have been buoyed by the Scottish Premier League's decision on Monday to postpone a decision on new Financial Fair Play sanctions, as requested by Rangers' administrators.

It means he can negotiate with the SPL over any sanctions that might apply to a newco Rangers entering the league, if he submits a proposal before 30 May when the clubs are scheduled to reconvene.