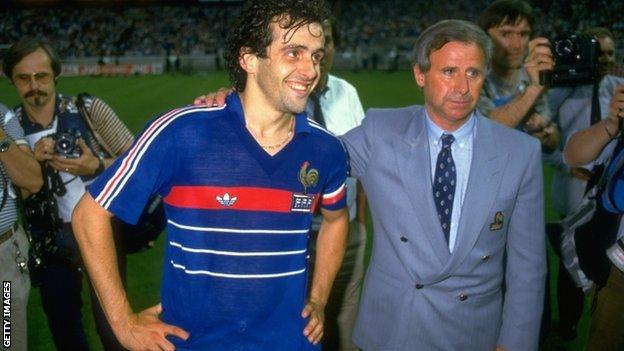 What makes a memorable tournament?

High-quality football, coupled with real drama? Success for the host nation? A star who lights up the competition?

The 1984 European Championship in France had the lot, a perfect storm that culminated in French glory, their first major trophy.

"It was the only final tournament where I wasn't injured. In 1982 I was injured - I had a groin problem - and in 1986 I was injured - with a nerve problem. In 1984 I wasn't injured and I was able to perform to my peak. It was a great moment for French football and for French sport as a whole. For us, it was also symbolic after the rather special defeat we had suffered in the World Cup semi-final in Seville against Germany in '82. Other than that, France had a very good tournament. We were superior to everybody and expressed ourselves on the pitch."

"Until 1984, the European Championship had not been blessed with great football," said BBC football commentator John Motson. "Until 1980, only four teams took parts in the finals. In 1980, there were eight, but it was a poor tournament.

"Like Jules Rimet and the World Cup, the European Championship was really invented by the French, a guy by the name of Henri Delaunay, whose name is on the trophy.

"The question was, could France win the thing that they had started?"

France had gone out of the 1982 World Cup at the semi-final stage in controversial circumstances, beaten by West Germany on penalties in a game remembered for goalkeeper Harald Schumacher's challenge on France's Patrick Battiston.

In 1984, they began their home tournament with a revamped defence and added Luis Fernandez to a talented midfield containing Michel Platini, Alain Giresse and Jean Tigana - the carre magique or 'magic square'.

"After 1982, we were expected to win in 1984," Fernandez told BBC Sport. "We had to win, we were the favourites and France was hoping that the French football team would be the first French team to win a big international sporting trophy.

"Before the tournament, we had a training camp in the mountains. We were a group that were happy to be together. We had pressure, but we had lots of desire and focus, and we were full of motivation to win.

"Our style was typically French - a passing game with lots of movement, and getting the ball forward quickly because we had a player like Platini who could score lots of goals."

Fernandez's understated assessment may do Platini a disservice. The Juventus man arrived in 1984 at the peak of his powers, midway through a run of three successive Ballon D'or awards.

And it was to be he who took the tournament by the scruff of its neck, the France captain scoring in every game, nine goals in total.

"In that tournament, Platini was unbelievable," said Motson. "I'd put him on the same level as Diego Maradona at the 1986 World Cup and Johan Cruyff in 1976.

"He was playing teams on his own. He was out of this world, a superstar. No team was able to contain him."

Two Platini hat-tricks helped France breeze through their group with three wins from three. They were to meet Portugal in the semi-finals in Marseille, a match Motson calls "the most emotional game of the tournament".

Level at 1-1, the match entered extra-time, where it looked like Rui Jordao's volley might knock the French out.

Where were the home nations?

There was no British representation in France. Scotland finished bottom of their qualification group, while England, Wales and Northern Ireland, who beat West Germany in the qualifiers, all just missed out. England, denied a place in the finals by Denmark, went on a summer tour to South America, with John Barnes famously netting in a 2-0 win over Brazil in the Maracana.

But, after Jean-Francois Domergue's scrambled equaliser, Tigana danced his way to the byeline in the final minute of extra-time and pulled the ball back for Platini, who fired France into the final.

"I've not seen a match like this in years," proclaimed Motson on commentary.

"Marseille was an exceptional atmosphere with a passionate crowd behind us," recalled Fernandez.

"We were in the zone, every player pushed himself to the limit because we had such an absolute need to win that game, so we dug incredibly deep to overcome Portugal."

In the final against Spain, a muted affair by comparison, goalkeeper Luis Arconada spilled a Platini free-kick to give France the lead, with Bruno Bellone's late chip sealing the trophy.

"We were not nervous because we had achieved our objective to get to the final," continued Fernandez, now 52 and the host of a sport talk show on French radio station RMC.

"It was a hard match but it was not the greatest match we had ever played. It was very cagey but we lifted the trophy and that was the most important thing.

"That tournament was perfectly right for the French team. They had the best scorer with Platini. It was probably the most beautiful French team to watch in history, probably even better than us (World Cup winners in 1998) in terms of football quality and I think they were stronger physically and mentally. I remember the World Cup in Spain, when they were beaten in the semi-final - I thought this generation deserved to win the World Cup before us."

"Before, France was a country that didn't know how to win - they used to say that the most important thing was taking part; in 1984 we showed people that we could win titles. We had become a footballing nation with the respect of other countries."

And what of Platini, the man whose dominance of a European Championship may never be matched?

"No-one can repeat what Platini did," concluded Fernandez.

"It's very important to have a great leader and he was just that. When you play with a genius like Platini, all the other players will improve.

"He was a player of enormous quality. He was a great passer and always scored decisive goals. He was a leader because he had lots of personality and was a good talker. He wanted to be a real number 10 and the real chief of the team.

"He had an exceptional tournament, scoring so many crucial goals. He was the difference in every match."