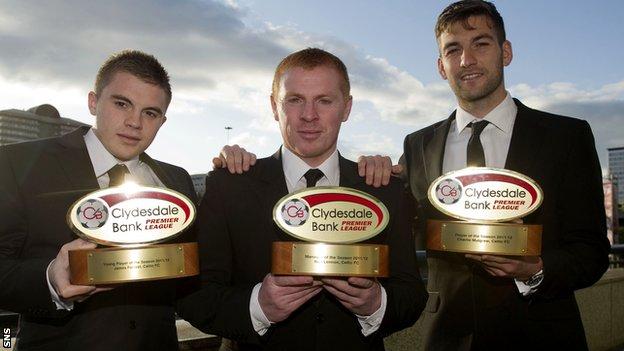 Neil Lennon picked up the manager of the year prize after claiming his first league championship as boss.

Defender Charlie Mulgrew was named the league's player of the year and winger James Forrest picked up the young player accolade.

Mulgrew and Forrest had already won the respective PFA Scotland player and young player of the year awards.

The pair have also made their mark on the international scene this season with 20-year-old Forrest becoming a Scotland regular and 26-year-old Mulgrew recently making his full international debut in Craig Levein's side.

Both players have been important members of Lennon's squad since the former club captain became permanent manager at the beginning of season 2010/11.

Lennon re-signed Mulgrew from Aberdeen after the versatile stopper had ended his first spell at Celtic in 2006.

Forrest came through the club's youth ranks and scored on his debut against Motherwell in May 2010, during Lennon's spell as caretaker manager.

However, Celtic midfielder Joe Ledley being denied a goal from a volley on 29 April earned Rangers goalkeeper Allan McGregor the save of the season award.

Kilmarnock winger James Dayton's strike against Dundee United at Rugby Park on 17 December was named goal of the season.

The former prize was for their "Kick and Collect" project - involving thousands of children attending sessions in areas highlighted by the police, with the result that youth disorder has been reduced with vandalism at a six-year low.

The latter is part of a SPL initiative aimed at improving match-day experiences for families and involves mystery shoppers visiting football grounds.