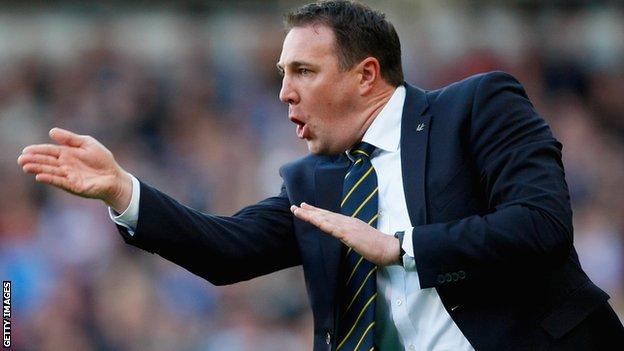 Manager Malky Mackay admits he will need to add to Cardiff's squad following their play-off disappointment.

Cardiff lost 5-0 over two legs against West Ham in the Championship play-off semi-final.

It was the third successive year they had suffered play-off heartache and now Mackay plans to add to his squad.

"We're certainly going to try and improve the football club again," he said.

"There's great strides been made this year on and off the pitch and I'm certainly going to be trying to push this again to make sure we get even better.

"We'll be trying to plan out the coming months ahead.

"You look at West Ham, and despite obviously the financial differences, there's a strength in depth they've got that has been apparent we don't have."

But despite last summer's upheavals, the Scotsman says his side have taken great strides during a season which saw them not only reach the play-offs but also the Carling Cup final.

"We were lucky to manage to get a team out on the pitch the first day of the season," admitted Mackay.

"We got to a memorable cup final that will probably live in people's memories for a long time and managed to get into the play-offs with the three teams that came down with the parachute payments.

"We've managed to go in an mix in with them and it's something I'm very proud of my group of players here."

Cardiff's season ended at a ground where they had won 1-0 on the opening day of the Championship campaign last August.

The Bluebirds were already facing a difficult task after losing 2-0 in the first leg and goals from Kevin Nolan, Ricardo Vaz Te and Nicky Maynard secured West Ham's place in the final.

But the second leg could have been different had referee Mike Dean not waved away an early penalty claim when Winston Reid sent Kenny Miller tumbling to the floor.

"But West Ham were clinical today. We're obviously disappointed, but we knew it would be a tough task.

"Congratulations to West Ham, they deservedly got to the final and good luck to them."