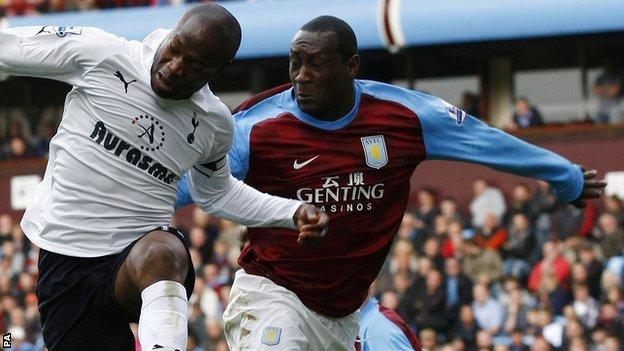 Emile Heskey is looking for a new club after being told he will not be offered a new contract at Aston Villa.

The 34-year-old former Liverpool and England striker admits a move back to his first club, Championship side Leicester City, could interest him.

"There's a possibility that might happen. I'm not going to turn anything down," Heskey told BBC Sport.

"I haven't got a club to be honest. There are no contract talks so I'll be looking elsewhere."

Heskey, who also played for Birmingham and Wigan added: "Obviously, my contract is up, so I just take it day by day and see what crops up."

The veteran striker has not scored for Villa since August, with most of his appearances this season having come from the bench.

But his under-fire boss Alex McLeish turned to him on Sunday in Villa's match against Spurs.

Heskey, capped 61 times by England, responded with a typically battling display as Villa secured a point which all but mathematically guarantees their Premier League survival.

The big target man was forced off after an hour with a painful instep injury originally picked up against Bolton last week.

Despite his age, Heskey insists he still has more miles on the clock, and that he is determined to add to his career tally of 153 goals from 712 matches racked up for Leicester, Liverpool, Birmingham City, Wigan and latterly Villa.

"From when I started, I always said I wanted to play at the highest level, wherever that might be. You always strive for that.

"I'm actually starting my coaching badges, so that is another avenue I'm going down now.

"But I'm going to have a little break, and then see what offers there are."

Although resigned to leaving Villa, Heskey will still depart with fond memories of the club who signed him from Wigan in January 2009, when Martin O'Neill opted to be reunited with the player he first managed at Filbert Street a decade earlier.

"We got to the Carling Cup final and an FA Cup semi-final [at Villa]," said Heskey. "So it's good memories.

"It gave me the chance [to play] at Wembley again, so I can't complain."

And Heskey summed up the relief of avoiding relegation after such a frustrating season at Villa Park.

"It is a massive weight off our shoulders," he said. "We have left it late but the lads have been battling on.

"It's been very difficult for us, with such a lot of injuries, but we've got on with it.

"It has been difficult, missing Darren Bent, which has been a big thing for us, and also missing our captain Stan Petrov.

"Just having him on the pitch at times is a massive boost to the lads and we've missed him since he's been having his own battle [with leukaemia].

"But you've just got to rally. The lads are capable of winning games.

"Sometimes when you get into a bit of a rut, your head gets down and you can't find yourselves getting out of it. But we've stuck together to push ourselves forward.

"I think we needed a few more players this season but we battled on with what we had."