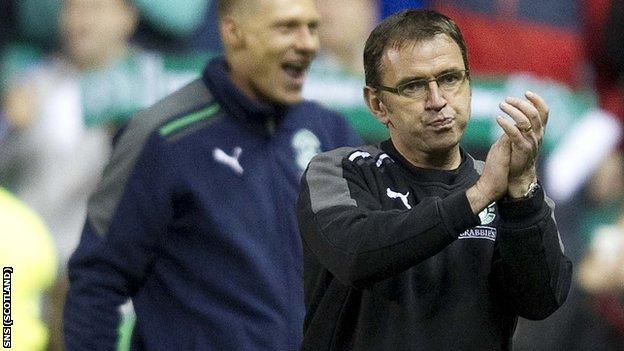 Hibernian manager Pat Fenlon admitted it was "a massive relief" to secure his side's top flight status after relegating Dunfermline.

A 4-0 win for Hibs confirmed that the Pars will finish bottom of the Scottish Premier League.

And Fenlon, who became manager in November, was delighted with the win.

"It was important that we stayed in the league." he said. "That's what we came in to do and I'm delighted for everybody that we've done that."

Early headed goals by Matt Doherty and Eoin Doyle set Hibs on their way to victory and Garry O'Connor's penalty gave them a 3-0 half-time lead.

Paul Hanlon was credited with the home side's fourth goal, but the ball did not cross the line after crashing down off the crossbar.

"We started really well," said Fenlon. "We're delighted to get early goals, obviously it gives everybody a massive confidence boost.

"I believe it [the fourth goal] wasn't over the line but we haven't had loads of luck all season.

"Had it been a 1-0 win with that goal then obviously it becomes very controversial but the fact that we've won 4-0 is pleasing.

"It's not nice when any team is relegated and it's disappointing for them."

James McPake had an assist in Doherty's goal and the on-loan Coventry defender had an outstanding match as Hibs kept a clean sheet in Fenlon's first home league win.

"He was tremendous," Fenlon said. "Since he's come in, he's been different class. He's what we need in the club; he's a great leader and we'd love to keep him but he's a Coventry player and we need to try and sort that out first.

"He's just an honest centre-half and he defends really well and he's the type you want. He doesn't want to concede goals no matter when it is and he showed that tonight; he got some great blocks in.

"Eoin Doyle was fantastic. Next season's a big one for Eoin and he showed the supporters that he's going to be a very, very good player."

The Hibs players stayed on the pitch after the full-time whistle to accept the applause of the fans and Fenlon conceded to feeling a little embarrassed.

"We're second last in the league and that was more of a round of applause for them than for us," said the former Bohemians boss.

"But that's what this club can achieve. To be able to get that every week, we need to make sure that we're winning football matches to continue that. The backing that we had was fantastic."