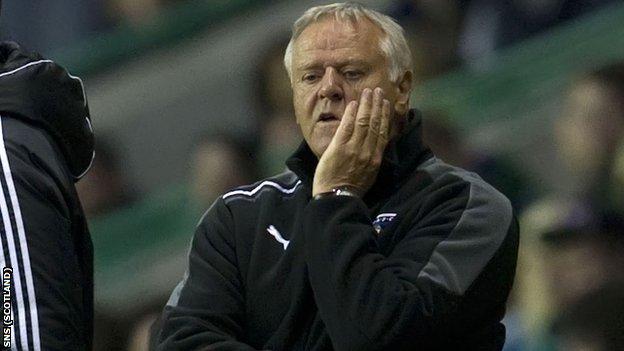 Manager Jim Jefferies will hold talks with the Dunfermline board following the club's relegation from the top flight.

The 4-0 defeat by Hibs at Easter Road consigned the Pars to Division One after one season in the SPL.

"I've got a contract for next year. The plan was to come in and try to help them stay in the league," Jefferies told BBC Sportsound.

"We'll have to lose some (players) as this will affect the budget."

Jefferies, who succeeded Jim McIntyre at East End Park in March with the Pars four points adrift at the foot of the table with eight games remaining, said it had been a steep learing curve for his squad.

"Defensively, the mistakes they've made have been punished and they haven't been tough enough mentally to handle this," he said.

"Hibs were well assisted with the goals tonight from our point of view. The game was over after the first 15 minutes.

Jefferies had hoped his effort would see the Pars beat the drop, adding: "If it didn't then we'd lick our wounds, go down and prepare to build a side with some of these boys and others to come back up in one go.

"A lot of these boys would probably do well in the First Division."

Jefferies praised the "fantastic" Dunfermline supporters and said they kept with the side right to the end of the game at Easter Road.

"They've been very supportive and made me feel welcome," he added.

"They knew that if it didn't work out then they know I'll work extremely hard to bring this club back up in one go."