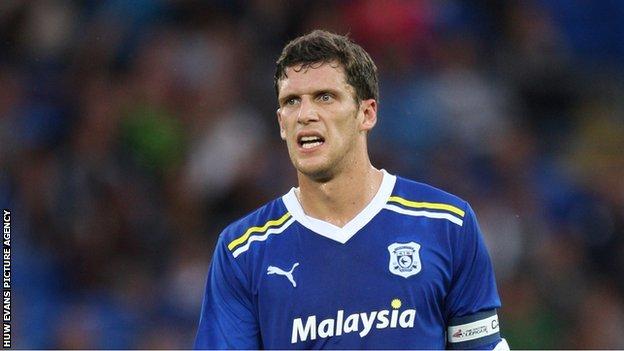 Manager Malky Mackay had to almost rebuild his squad from scratch when he took over last summer from Dave Jones.

Despite the overhaul, Cardiff reached the Carling Cup final and the play-off semi-finals before losing to West Ham.

"It's obviously a really disappointed dressing-room at the moment, but if we look back... we'll look back at the positives," Hudson said.

"I don't think anyone would have thought we would have got to a final and got to the play-offs.

"I've got to say thanks to everyone that's stuck with us, the fans were fantastic right until the end.

Cardiff were not expected to achieve much this season, but confounded expectations by taking Premier League opponents Liverpool to penalties in the League Cup finale at Wembley.

The Bluebirds also reached the Championship play-offs for the third season in succession, although the fans had to endure another miserable post-season experience.

City lost out to Reading at the semi-final stage last year, were beaten 3-2 by Blackpool in the 2010 final and narrowly missed the play-offs in 2009 on an inferior goal record.

But Hudson remains upbeat despite the hurt of the back-to-back defeats to West Ham over the two legs.

"If you look at what's happened with the club, we've had a big turnaround, new staff, new owners over the last couple of years, 12 players leaving and 12 players coming in, maybe more, over the course of the season," Hudson added.

"We're a young bunch, a small group and we've gelled really well... but maybe it was one step too far for us.

"If we keep getting there with the consistency that we've done over the last couple of years, it's got to come for us once and if the fans keep sticking with us we'll keep doing what we're doing and hopefully keep getting better."