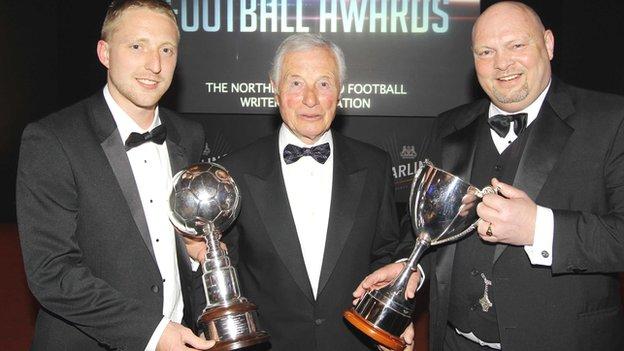 Rory Donnelly won the Young Player gong after netting 17 times for Cliftonville before moving to Swansea.

Jonny Evans secured the international award while Jimmy McIlroy was inducted into the NI Writers' Hall of Fame.

Former Northern Ireland player McIlroy scored 10 international goals and was part of the 1958 World Cup side.

Morrow has been a star performer for the Crues this season, scoring the only goal in the the League Cup decider against Coleraine and helping the north Belfast side to the final of the Irish Cup and Setanta Cup.

Jeffrey picked up the manager award two days after his team clinched a sixth league and cup double in seven seasons.

Donnelly, who was a sensation for the Reds before his big move to the Premier League, also won the Goal of the Season award for his superb strike against Linfield in November.

Newly promoted Ballinamallard celebrated a double, with the Championship winners voted the Non-Senior Team of the Year and midfielder Chris Curran named the top Championship player.