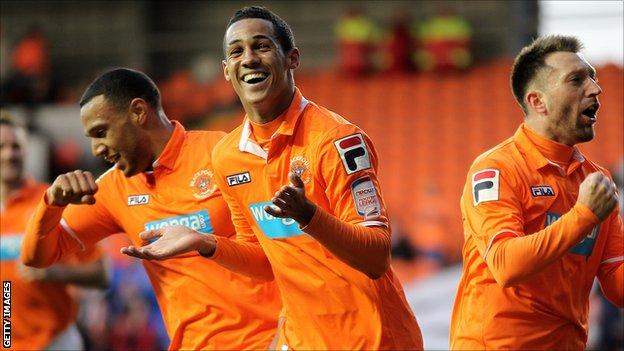 Tom Ince says Blackpool will not sit back and will look to attack Birmingham in the second leg of their Championship play-off semi-final.

Ince's deflected shot was enough to give Ian Holloway's side a 1-0 lead going into the second leg at St Andrew's on Wednesday evening.

He told BBC Radio Lancashire: "We could have really killed the tie.

"We're going to go to Birmingham with an advantage and we'll try to score goals there to really kill the tie."

The 20-year-old midfielder continued: "We have let them off the hook but we've got to be brave.

"We've got to show character at Birmingham to defend, but we can also nick goals on the counter attack."

The winners will face West Ham in the final at Wembley on 19 May, after they completed a 5-0 aggregate victory over Cardiff on Monday.

While saying Blackpool dominated the first leg at Bloomfield Road, Ince believes the return fixture will be a lot more difficult in front of a partisan home crowd.

"You look at the fans they brought and the passion of their fans is unbelievable," added Ince. "As I said, we've got to be brave and try to win the game at St Andrew's."

Manager Ian Holloway added: "It's going to take every ounce of everything we've got going down there with their crowd and their passion.

"I needed a lead, we've got a very slender lead. We won the first game and I think that's a marker to them.

"I'm looking forward to it. I can't be worried. I'd be worried if we were not in this situation. I feel my team deserved it on Friday night.

"It will be a great night. I'm looking forward to it. The Brummie people love their football. Passion? You won't get better than there. It's absolutely brilliant."