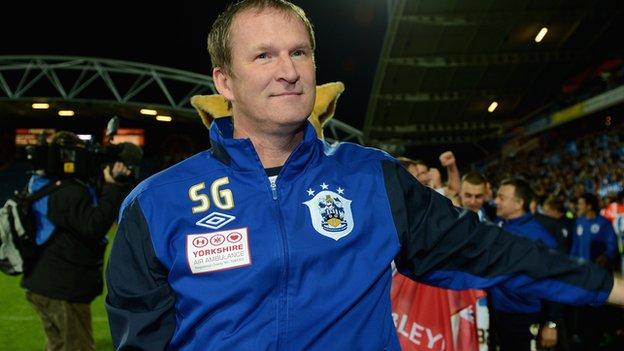 Huddersfield Town boss Simon Grayson has admitted he thought the second leg of their play-off semi-final against MK Dons was going to go to extra-time.

Town, leading 2-0 from the first leg, went ahead on the night through Jordan Rhodes but goals from Daniel Powell and Alan Smith set up a nervy finish.

"When there's two minutes to go, anything can happen."

He continued: "We saw the game out well enough though and I'm obviously delighted with the end product we've got."

Grayson took Blackpool up to the Championship through the League One play-offs in 2007 and was quick to point out that Huddersfield had achieved nothing simply by reaching the final.

"It's a great occasion but there's only one thing that matters when you get there and that's winning," he added.

"If you don't win then you may as well have finished 15th in the division and spent the last three weeks on holiday."

Having taken over from the sacked Lee Clark in February, Grayson has now guided the Terriers to a second successive play-off final and they will face Yorkshire rivals Sheffield United on 26 May for a place in the Championship.

"It's got the ingredients of being a great game. Obviously there's Yorkshire pride at stake but more than that, there's a ticket into the Championship.

"We'll go there in great spirit and we'll work hard over the next 10 days to finish the job that was started at this club in August," Grayson added.